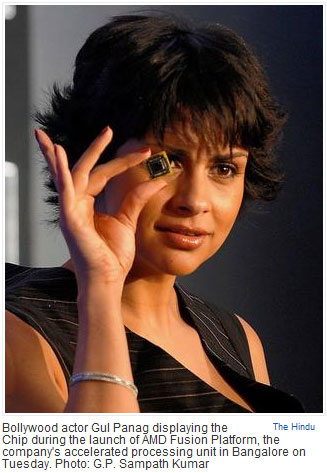 It is designed to handle multi-core processors and high-end graphics
Computer processor manufacturer AMD announced on Tuesday the launch of its new generation of processors, the Fusion platform.

Claiming that AMD was the only chip-maker to have established capabilities in designing and manufacturing central processing units as well as graphics processing units, Mr. Swaminathan said, “The APU will set the new industry standard.” He said the capabilities of the new range of processors make them ideal for use in a range of products – from mobile phones to desktop computers. While the E-series and the C-series of APUs would be available in India soon, the higher-end A-series APU would be available by May, Mr. Swaminathan said.

Michael Goddard, Corporate Vice-President, Chief Engineer, Low-Power Clients, Products Group, said the AMD’s Indian technology development team, based in Hyderabad and Bangalore, had played “a critical role” in the development of the processor. One of the key features of the new chipset is its “AllDay Power” capability, which enables usage of computers for more than 10 hours on a single charge. “Our team in Hyderabad played a major role in achieving this,” he said. AMD’s two centres in Hyderabad and Bangalore employ about 1,100 persons.

Manju Hegde, Corporate Vice-President, Fusion Experience Programme, said, “In a situation in which visual perception has become the key, especially among the youth, the processor’s limitation can prevent consumers from enjoying high-end graphics.” “The new design now offers to ordinary people the computing capability that was earlier associated with supercomputers,” Mr. Hegde said.

Speaking at the launch, Bollywood actor Gul Panag said the new processor’s power-saving feature would be a boon for users who were increasingly seeking richer graphic content on the Internet.