Barely a minute into a conversation with Gul Panag and you know that she has an unexplained propensity for cars. She likes to describe herself as an “auto enthusiast”, but in her case, that is a slight understatement. She fervently talks about her experiences of driving a number of cars over the years, the first being a rustic Tata Indica she bought when she was 20. Her present fleet of cars isn’t overly swank; she owns an Audi Q5, a Mahindra Scorpio Getaway- a monstrous vehicle from the car maker’s pick-up truck category – ably complemented by the much teenier Mahindra Reva. On normal work days though, the Reva is her car of choice. The Reva, she says, allows her to successfully tackle Mumbai’s cramped roads and woozy traffic. 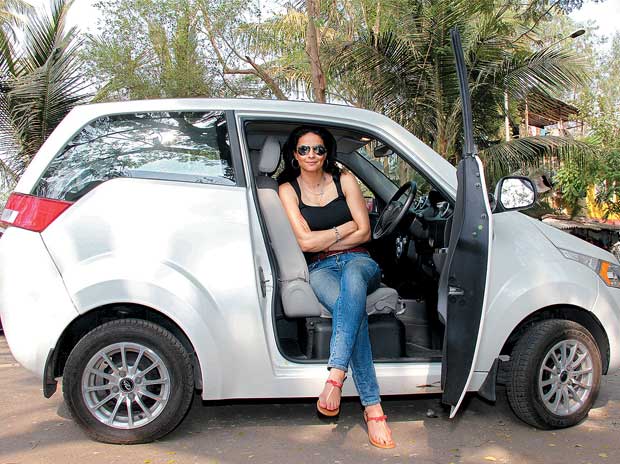 “It is sleek, strong and effective; an easy car to drive. Moreover, you’re saving the environment,” says Panag. She bought a glinting white-coloured Reva e20 for her birthday in January last year; hers is a fully-loaded version, one whose features can easily match up to the Audi Q5. “I had the car for a month before I bought it, and I loved it. It was nothing like I had driven before,” recalls the actor. In a city where class-conscious celebrities often roam about in splashy, extravagantly-priced cars, it is incredibly refreshing to see Panag depart from the normal. Electric cars, according to her, are the future.

“It may sound banal but all you need is a change in mindset to switch over to an electric car,” says the 37-year-old. Electric cars currently form a tiny share of total car sales in the country. The trend is slowly picking up though. At last month’s Auto Expo in Greater Noida, three of the country’s biggest car manufacturers signed a pact to jointly develop critical parts for an all-electric hybrid car. This was a major shot in the arm for the future of electric cars in India.

Panag says that she doesn’t spot too many Revas in Mumbai, but makes sure she clicks a picture whenever she sees one. “People come up to me as well. More than me, they are curious about the car. They ask me all sorts of questions,” she gushes. The experience of driving such a vehicle, she adds, brings with it a different kind of joy. “It’s almost like a toy but it does pack a punch.” This biggest benefit of driving such a compact car in a bustling city like Mumbai is parking. “You spend so much time looking for a parking space. With the Reva, there are no such hassles,” says Panag.

A decade ago, celebrities in Hollywood ditched their bulky SUVs for the full-hybrid electric Toyota Prius. The Prius made driving an electric car “cool”. In a lot of ways, this hybrid vehicle was the new chic style statement. “Celebrities made it look cool. That’s what we need now. Air quality in most Indian cities is worsening everyday,” says Panag.

In 2012, FIA, motor sport’s world governing body, launched the Formula E, a new class of auto racing, using only electricity-powered cars. These cars can easily clock 220 kmph, lag significantly lesser than petrol-powered cars and recover quicker on the turn. “It’s a myth that these cars aren’t powerful enough. Formula E is a prime example,” says Panag. At Le Mans, one of the world’s oldest endurance racing events, electric cars have been consistently outperforming their petrol counterparts. Earlier this month, Bruno Senna – nephew of legendary Formula 1 driver Ayrton Senna – said that the future of racing lies in Formula E as it is much more accessible to the public. This came as a pleasant surprise from someone who has driven a Formula 1 car all his life.

“Some people think that what if I’m driving and the charge runs out. Charging a car is like charging your mobile phone – you plug it in before leaving your home in the morning,” says the actor. “It’s that simple.” However, lack of awareness and negligible public charging infrastructure remain two key deterrents for more people eager to go the electric way.

At her office in a quiet corner of Andheri West, a slew of passers-by often stop and wondrously stare at the car. She faces much of the same if she gets stuck in a snarling traffic jam at Juhu while driving back home. “The car is not very common here but that will hopefully change,” she laughs. The Reva e20 is priced at a steep Rs 4.79 lakh. For those who are reluctant to go green, Panag says that they should give it a try. “People have all the wrong notions about electric cars. They should try driving one just once. They will feel the difference,” she says.