Home / News and Media / Gul Panag and Abhijit Kokate launch adventure documentary Off Road with Gul Panag: Ladakh
Versatile Actress, Model, and Former Beauty Queen and Politician Gul Panag and Film Director  Abhijit Kokate addressed the media personnel and informed about the infotainment adventure documentary titled “Off Road with Gul Panag: Ladakh” featuring their travel on a Mahendra Scorpio Get-Away to Ladakh. This first season show will be aired on Discovery Channel on March 27, 2015 at 8 pm. 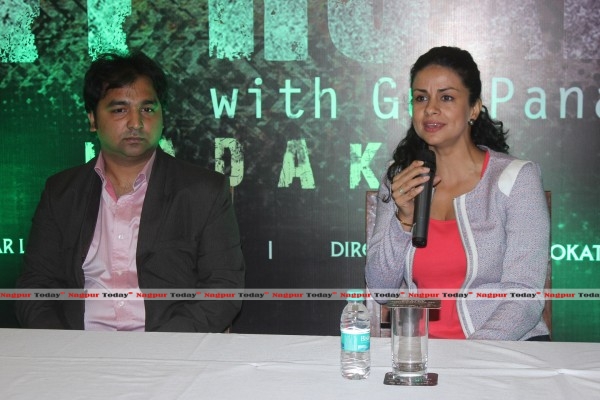 While speaking to the media, Gul Panag relates about how two ladies Gul and Swati traverse the beautiful scenic places of Ladakh in an unforgettable journey – The Ladakh Run.
Gul Panag claimed that she had owned a Mahindra Scorpio, her trusted adventure Jeep in the past. However, after looking at a series of videos shot by her husband Rishi Atari during a particular adventure trip, she got the videos edited and had uploaded them on You Tube. This video had received a million views and that encouraged Gul to plan for a real “Girls trip out”!!
After planning and re-planning, and after a thorough research, she got customized unstoppable vehicle on a Mahindra Scorpio Getaway platform built. Gul Panag had got in touch with her friend and had explained her requirements to him who then customized the Scorpio to Supermilo. The jeep became apt for such adventure trips.
It had almost everything one needs to go on an adventure trip. Like an extra fuel tank, winch, tent equipments etc. The redesigning of the vehicle had added around 350 kilograms to the vehicle. Some of the fitments like the bumper was pure steel, the chassis was solid steel to withhold any stressful situation that a vehicle may have to face. This they compensated by a powerful engine and a special equipment in the fuel supply to optimize the performance. Gul Panag is well versed with her vehicle. She claimed that they raised the ground clearance by 50 mm. Well, that is what made their trip an enjoyable one for Gul and Swati.
Her friend Swati, a Lawyer by profession, as Gul Panag claimed, always had a will to travel but could never make time for it. With Gul’s encouragement, Swati had agreed to accompany her in her adventure trip. The journey to Leh-Ladakh was perfectly timed for Gul to take on an adventure.
While answering to media about her fitness, Gul Panag claimed that she started running from the age of 15 which she still continues. This has enabled her to stay fit. She claimed that running helps in release of Endorphines which is good for the mood and for the physique. While answering another question in the same lines, she said that she eats sensibly and avoids outside food (untested food sources). She prefers to eat healthy food.
While answering if Gul was serious about politics, she answered that she is very serious about politics. She claimed that if one does not want to do anything about what is irking them, they have no right to keep pointing out the mistakes and errors, mismanagement etc going on in the political scenario. One basic point that she pointed out was one should always check the source of revenue, whenever someone claims that they are full-time politician. Since many politicians earn their livelihood by getting bribed for some or the other favours. Gul claimed that she earns a responsible and honest livelihood.
Gul Panag, a multi-faceted lady who dabbles in many fields of expertise, is a perfect example for what a lady of the 21st century should be. She enjoys her acting career (where she makes sensible choices of her role), fulfills her urge for adventure by driving to distant places, enjoys driving her motorbikes (breaking the stereo-typing of roles), is a sensitive and serious politician, enjoys the love and affection of parents and husband (who are supportive in all her endeavours) and yet is an adorable beautiful lady with all the sensitivity of an Indian woman.