The gorgeous and superbly toned 31-year-old Punjabi lass took our breath away in the one shoulder floor length viscose gown from Anita Dongre’s Liva Viscose for AND summer/spring 2009 collection.

The gown was customized for Panag, a regular with the designer house, to ensure the fabric and silhouette draped perfectly on her lean tall figure.

Her hair was styled in an updo, reminiscent of old Bollywood charm. She rounded her looks with pink lip color, light eye makeup and blush and coffee nails color.

Gul Panag is currently dubbing for Prakash Jha production Turning 30, directed by debutant Alankrita Shrivastava. The film is about the trials and tribulations of a woman turning 30. The film additionally co-stars Purab Kohli.

Panag will be next seen in Subhash Ghai’s long awaited Hello Darling due in theaters on July 30. The film focuses on working women and sexual harassment. 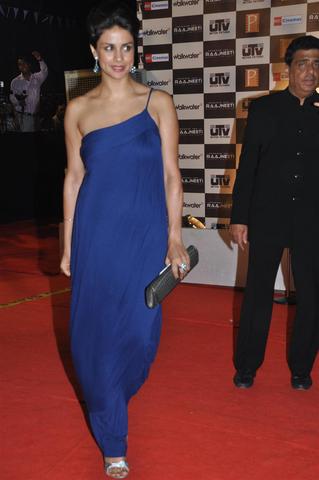 Inspired by Hollywod’s Charlie’s Angels, Hello Darling features three leading ladies -Esha Koppikar, Gul Panag and Celina Jaitley – as working women who bond together in a posh office of Mumbai. Each of them belongs to a different section of the society.

Javed Jaffery plays the role of their smart boss.

Sunny Deol does a cameo in the film that additionally stars Chunky Pandey and Rajpal Yadav.

Panag says she takes up the films that she will not regret ten years later. She rejects nine film proposals out of ten.

“I reject nine out of ten movies that are offered to me but I have no regrets. I need to want to do a film. I won’t just do a movie for no reason. That’s not the way I have planned my life and my future,” she told while talking to media in Bangalore late last month.

The sporty former Miss India (1999) ran the half marathon for Sunfeast World 10 K in Bangalore. She is training for a triathlon in Singapore end of the year.