Home / News and Media / Gul Panag: Gul-orgeous in Blue at CNN-IBN Citizen Journalist Awards 2013
March 02, 2013, (Sawfnews.com) – Gul Panag looked sedately sexy in a blue Anne Klien sheath dress at the fifth edition of CNN-IBN’s Citizen Journalist Awards in Delhi on Friday, March 1, 2013.
The 34-year-old actress/activist has been associated with the Citizen Journalist initiative for the past two years and anchored the TV show for which IBN Network partnered with Idea Cellular Ltd.
Gul smoldered despite her conservative styling with her fulsome curves making light of their sartorial constraint, and natural good looks evident through even blurry vision. 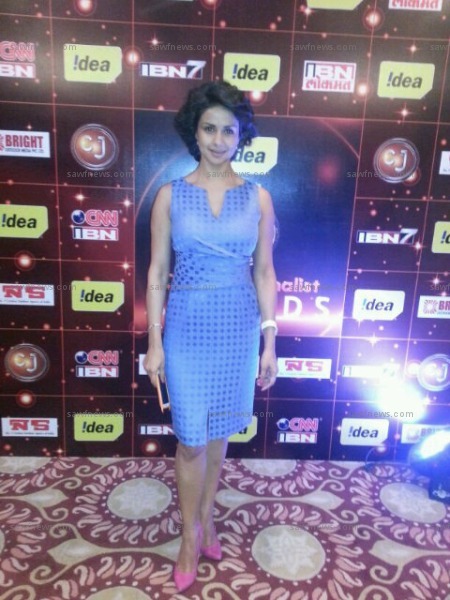 Her sleeveless plaid number was cinched at the waist and ended at the knees. She accessorized with pink Steve Madden pumps, earrings from Jagdish Jewelers of Chandigarh, a Tiffany bracelet, and an Espirit watch.
Her hair was styled voluminous. Natural face makeup rounded her delightful look.
Talking with Sawfnews.com, Gul shared her faith in the Citizen Journalist initiative.
“I Have been associated with this movement called Citizen Journalist for 2 years. Despite being in the thick of the Sarsa (her debut Punjabi film which she is co-producing) release and pre production for my next, which is an Indo French production, I felt I had to come down for a few hours to Delhi to attend this.”
She left for Mumbai soon after the show.
“I was dead by the time I reached Mumbai at 2 AM. But well worth it,” she added.