By the time you finish reading this, Gul Panag will be in Russia, busy watching a film at the Russian Film Festival. “I am a jury member this year,” she told us before leaving for the festival, which started yesterday and will go on till September 18. 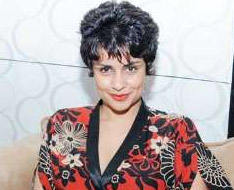 Gul turned 30 recently and that too while shooting for “Turning 30”. “A turning 30 syndrome plagues only the city-women, for in other parts of India, by the time one is 30, one is married with two kids,” she said making it sound like she has no qualms about turning 30. So, does the movie, “Turning 30”, bring in light any of her own experiences? “I really have relived some of my funny personal experiences before the camera,” she said with a smile.

“Interestingly, the whole crew of “Turning 30” actually turned 30 while shooting for this film!”she added. Entire crew – she must be kidding? “See, I recently turned 30, the director turned 30 and so did the casting designer and the cameraman,” she said. Co-star Purab Kohli also? “Purab had turned 30 some time back, but it wasn’t so long ago. There was only one person, whom we call Suresh bhai, who wasn’t 30, but much older, because Prakash Jha wanted one elderly person to be around to keep an eye on us 30-somethings,” said the actress.

We asked if her unique hair cut restricts her from playing different roles? “Your hair can hardly ever restrict your career. And if a role demands long hair, then there are always wigs that can be used. And wigs are as good as natural hair,” she explained. That’s probably because she doesn’t play the quintessential in-love Bollywood girl who sings and dances, right? “In the next 5 years, we will see a death of such unrealistic films where one has to do that,” deemed Gul. “We do have Hollywood films that are unreal too, but even in all that, there is some realism. Today, the audience prefers to watch a film like ” Avatar” in Hindi over a stupid Hindi film,” she added.