The Delhi rains tried to play spoilsport at the SRCC Youth Conference, but the spirit and enthusiasm to deliver the best show kept the students going.

Day One of the SRCC YC was a low-key affair with actor Chunky Pandey cancelling his session due to rains in Mumbai. But the line-up of powerful speakers like writer and poet Aranya Johar, actress Gul Panag, singer Usha Uthup and writer Gurcharan Das were enough to keep the enthusiasm high of all those who had come for the event.

I try to speak like Smriti Irani: Gul Panag 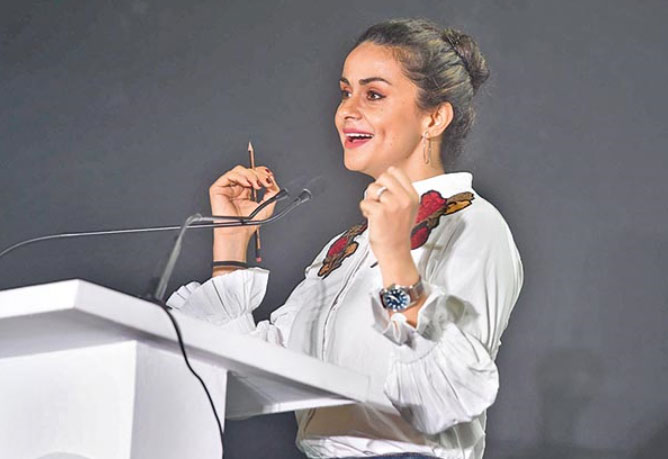 Former Miss India, actress and entrepreneur Gul Panag began her session by saying, “It is an honour for me to speak in front of the brightest minds of this country. I also wanted to get admitted to this college but did not get due to a technical reason, my school results came too late for admission here.”

While talking about her journey to become the Miss India in 1999, she said that she did not win because of her looks but because of the way she spoke. “The way I looked was just a factor, but the biggest factor in winning that pageant was my ability to speak, which had me scoring above all.”

During the Q & A round, when a student asked her for tips of speaking in public, she replied, “I think it is important to find a role model in someone. You need to find one person and say that I want to speak like him/her. For me, that person these days is Smriti Irani. She is clear, uses short sentences and is well-versed with her topic, so I try to speak like her.” When asked about her future in politics and if she will contest the elections again in 2019, she said, “I am 38 and I wish to start a family soon. My focus is on that, I don’t think I will be able to manage politics and that together.”