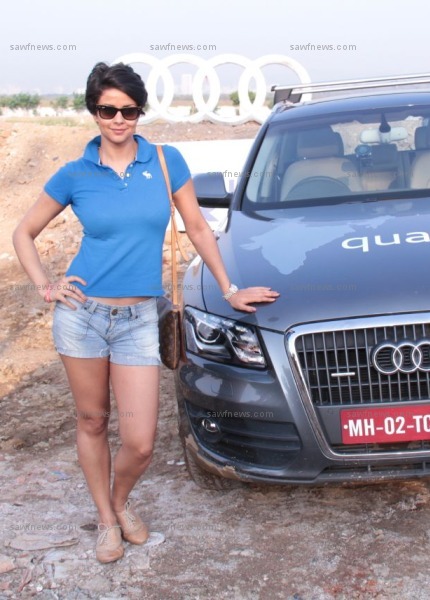 October 30, 2012, (Sawfnews.com) – What could be sexier than Gul Panag in Daisy Dukes? How about Gul Panag in Daisy Dukes standing by the side of an Audi Q?
Are you an MCP who is always wary of woman drivers? Well dear, its time to get leery of women drivers because Gul and German luxury carmaker Audi have teamed up to promote their Audi Q series as the perfect wheels for women in India – rich and sexy women, that is.
Audi organized a Women’s Power Drive event in Mumbai on October 26 to let Indian women check out the driving and luxury credentials of Audi ‘Q’ series, and Gul was there looking droolworthy as usual, in Daisy Dukes and Abercrombie & Fitch Tee.
Backed by renowned German technology, the Audi brand can’t get any sexier than it already is, but Audi’s brand ambassador Gul can, and she does get, and you will agree with us once we reveal a secret about the attire that she was wearing at the event, or a secret about the attire she was not wearing at the event!
No, we aren’t trying to be naughty here! Just talking about Gul’s daisy dukes. Shortly before the event they were her favorite Guess jeans, but she cut them off below mid thigh level and converted them into frayed and distressed shorts!
“I cut them (pair of her Guess jeans), folded one inch and tacked them on the seams both sides,” Gul told Sawfnews.com nonchalantly.
The Dor (2006) star accessorized with Ray Ban wayfarers – orange rimmed limited edition, beige Steve Madden Brogues to keep the lose dirt off her feet, Louis Vuitton satchel, and a Rolex watch.
Gul was one of the speakers at the all women event. Her excitement to be around the newest wheels was not hidden from anyone, just as her toned stems weren’t hidden from anyone thanks to her sartorial craftsmanship!