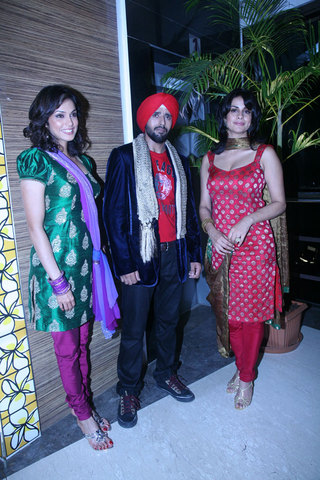 The Manoj Tiwari helmed comedy penned by Pankaj that focuses on working women and sexual harassment. It began filming in December 2007.
“And it’s FINALLY a picture wrap for #HelloDarling . What a trip this has been ladies @eeshatweets @CelinaJaitly with the padringays:),” Gul Panag tweeted on Thursday, July 8.
Earlier, while filming a promo song for the film late into the night Gul had tweeted:”I am not an insomniac. Just being driven to work at this hour. Shooting promo song for #hellodarling”The film was given final touches recently. A song, Mai leke aya band baja, was reshot on Subhash Ghai’s instructions. The song originally featured Shreyas Talpade, but he was replaced by Anil Mange, a new graduate from Ghai’s academy, because Shreyas could not accommodate the dates. Ghai was understandably not pleased with Shreyas.
Inspired by Hollywod’s Charlie’s Angels, Hello Darling features three leading ladies -Esha Koppikar, Gul Panag and Celina Jaitley – as working women who bond together in a posh office of Mumbai. Each of them belongs to a different section of the society.
Javed Jaffery plays the role of their smart boss. Divya Dutta plays his wife. The film additionally stars Chunkey Pandey and Seema Biswas.
The Mukta Arts production is due in theaters on August 27. Music, scored by Pritam, is scheduled to release a month earlier, on July 27.