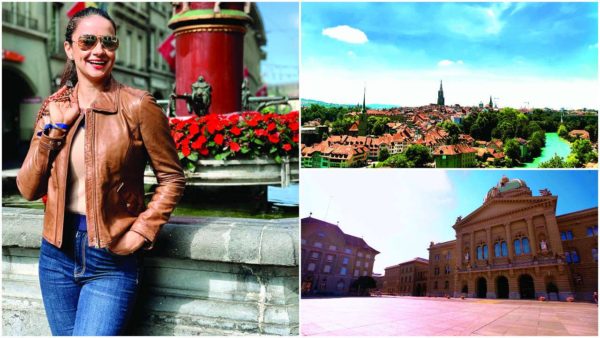 Even though Gul Panag has visited Switzerland a number of times in the past, her recent trip was more special because she went to see the first-ever Formula E (electric car) race in Bern. The actress enthuses, “Bern is a beautiful town and to see it transformed into a racetrack for this exciting event was an incredible experience. I’ve been driving an electric car for several years myself now and think they are the future.”

An avid biker as well as a runner, Gul states that she loves Switzerland. “It’s a pristine country, naturally pretty, with beautiful lakes and mountains. I also like the Swiss culture, the food and people,” she informs. That apart, the tech fiend thinks there’s always something new to discover when it comes to gadgets. “I’ve done two road trips, and this was my second trip to Bern,” she adds.

Visiting for the weekend, Gul shares about her itinerary, “I had a meal in the city centre on a Friday evening, spent the whole of Saturday at the race and a part of Sunday was spent walking around the city of Bern before catching the train to Zurich.” Reaching the city included a scrumptious meal by Limmat River, overlooking the Old Town. “It’s a perfect cosmopolitan city bringing together the old and the new,” says she. For Gul, the race was the most memorable part of this trip. “To see the ancient city of Bern transform into a racing carnival was amazing — it was like seeing history embrace the future. It was incredible to see the residents out and about, activities and stalls showcasing the future of mobility,” says she.