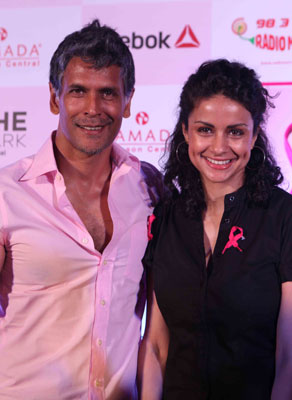 Pinkathon is the biggest multi-city women’s running event to encourage and promote fitness & health among women and create awareness for Breast Cancer. Giving out the message of “Each One Kheench One”; Pinkathon urges all men to encourage at least one special woman in their life to participate. Renowned Fashion Designer Namrata Joshipura and RJ Jassi from a radio channel were also present at the launch to support the cause. Registrations for the annual women’s run are open for all three categories – 10 km, 5 km and 3 km.
The multi city event running in its 2nd year was a huge success last year, where more than 2500 participants including women from corporates, colleges and social platforms participated in the run under various categories. Pinkathon is now spread across 6 cities, expanding to Ahmedabad and Chennai in 2014.
Announcing the launch Milind Soman said, “After the encouraging response from last year, Pinkathon is back in the capital. Following our new mantra of ‘Each One Kheench One’, I personally urge all the men to show their support by encouraging the special women in their life to participate. And I am confident this time also the capital will come together with full vigour to help spread the awareness about breast cancer”.
The supermodel turned actor admitted that his mother was truly an inspiration for him to start this initiative. The main purpose behind Pinkathon was started mainly to encourage women of India for a better and fitter lifestyle.
Former Miss India and Fitness Enthusiast Gul Panag said, “It’s a pleasure to be associated with Pinkathon for consecutively 2 years. I feel that a platform like Pinkathon is very important in today’s age not just to create awareness about the much neglected disease but also encourage women to come out of their shell and talk about it. I wish Milind all the success in this noble endeavour and urge the citizens of Delhi to ‘Each One Kheench One’.
The role model for the actress is her father who always urged Gul to stay fit by encouraging her to take up outdoor activities.
Empowering health is the biggest wealth anybody can have, said the actress at the conference.
Deveika Bhojwani, Vice President Women’s Cancer Initiative-Tata Memorial Hospital said, “Having worked towards the cause of breast cancer awareness for several years, I firmly believe that Indian women need to realize how important it is to understand the ailment and its risks. In addition, it is crucial to get yourself checked, spread the word on a personal basis, and adopt fitness as a way of life.”
Devika, who herself has fought breast cancer joined Pinkathon to bring about a change and raise funds for all those women diagnosed with the disease.
Milind, who has been one of the strong pillar behind Pinkathon campaign, requested everyone to stop treating breast cancer as a taboo. It could happen to anyone and should be treated in the early stages. One cannot rely 100 percent on the government, though they are doing their part. We need to take matters into our hands. Each woman should be hundred percent fit only then she can take of her family in the best way, the actor said.
This year Pinkathon has joined hands with Globe-athon for a cause to end Women’s Cancer. Globe-athon is a worldwide movement of physician leaders, advocacy groups, professional societies, government officials and everyday people to build unprecedented public awareness about the global impact of gynaecologic cancers. Globe-athon is the first international movement focused on the prevention and early detection of all Gynecologic Cancers- uterine, cervical, ovarian, vaginal and vulvar.
The 10km running race will be held on September 14, 2014 at Jawaharlal Nehru Stadium.
I`m sure all Milind`s fans wouldn`t want to miss out on this one.