Home / News and Media / Mirror fixes-it: Fourth gear
It was hard to imagine that they were meeting for the first time.

Following a brief introduction, the conversation between actress and motorbike enthusiast Gul Panag and Sheetal Bidaye quickly turned into two buddies discussing the wows and woes of riding a bike on Indian roads. While Bidaye takes her Hero Impulse everywhere she goes (“it’s a good ride through Mumbai traffic and great for the hills too) Panag prefers to “borrow” husband Rishi Attari’s Enfield over weekends.
The celebrity says she would rather ride on country roads than scramble through city traffic. Bidaye nods in agreement, before adding that she too does not ride any of her other bikes – Enfield 500, Pulsur 180 and the KTM Duke – in the city. With names of bikes being thrown around, a familiarity is established between the two and any awkwardness vanishes. 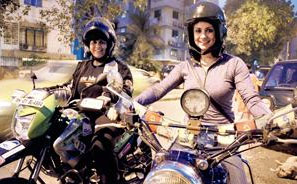 Both Panag and Bidaye quash the image of a woman biker as a tomboy. “That is a weird gender stereotype. Apparently, the belief is that girls can’t change gears so the people who market two wheelers sell scooties to them and bikes to ‘macho’ men,” says Panag.
According to Panag, her cousin sisters used to ride a motorbike way before she even hit her teens. That was inspiration enough. “They used to go to college in Chandigarh or ‘Man Town’, on their motorbikes.
Later, I got a cousin’s hand-me-down Enfield, since he was in the army and was posted in the Valley. He left his bike in our garage and asked me to ‘just start it every few days’ so the battery wouldn’t die. I played along. But on the third day, I thought it wouldn’t hurt to take it for a ride.
After that, I decided to start taking it to college in Patiala.” Bidaye wonders how Panag managed to ride the Enfield without ever being “taught” to ride a bike. “I knew the basics so I tinkered around and figured it out. Of course, I’ve had quite a few falls, which is why I always ride with good gear,” Panag admits.
The conversation veers towards long rides to Ladakh. Both impress each other with their stories and travels. The Dor actor first rode to Ladakh some 12 years ago, long before it was a “fashionable” thing to do. Meanwhile, Bidaye holds two Limca Book Records for riding to Ladakh and beyond. She wants to know more about Panag’s first trip.
“My then-boyfriend-now-husband owned a BMW 650. It’s an offroad bike but it’s also good for long journeys. We rode from Delhi to Leh and during the journey, I learnt a lot about him, which was good, and he learnt a lot about me, which was bad,” she says with a hearty laugh.
“It’s not easy riding for nearly 12 hours a day. We were taking turns riding and it was on this bike that I had my first fall from! I’ve learnt that once you know you’re falling, you simply let go and try to make it as graceful as possible,” she says.
Over the last13 years, Panag has made a trip to Ladakh almost every year, though not always on a bike. While she likes to plan every last detail of her travel, Bidaye is the vagbond rider, preferring not to book hotels and stopping wherever the road turns into a beautiful view.
Panag, in the meanwhile, was excited to check out Sheetal’s ride so they stepped out of the coffee shop for a dekko. When Panag is done scrutinising Bidaye’s ride, she asks her to join on a bike India Bike Ride.
Plans are made to meet up yet another day. Bidaye is thrilled to meet a celebrity minus the hang ups. “It’s always great to talk bikes,” she says, before she vrooms away.