Day 1
We arrived in Port Blair ( from Chennai) amidst cloudy skies and the remnants of puddles from rain the day before; hoping that the next 3 days would have clear skies. The clearer the skies the clearer the water too,I’d been told. 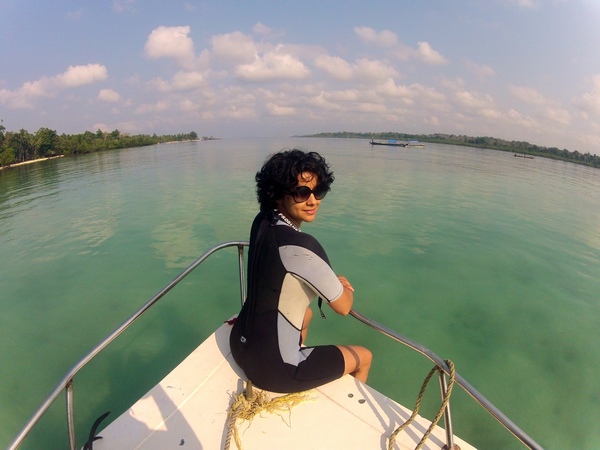 The airport at Port Blair has a holiday feel to it.Things move at an easy pace. It’s quaint in a modern way, yet functional. And rather clean. Foreigners are herded into another line and have to fill forms to register. ( I was mistaken for one and asked to fill a form. I didn’t know whether to be flattered or insulted. Any how, they took the form back after seeing my better half.)

The sea plane journey to Havelock was uneventful, yet serenely enjoyable. The ever prepared Husband had informed me well in advance that we could carry only 5kgs per head. So we had 10kgs between the two us, 4kgs of which were his camera & lenses, (underwater camera too). And 645 gms, the weight of his half empty bottle of scotch. The unfairness of it, not withstanding, we were able to avoid the haggling over excess baggage. I also realised how many frivolous things I used to carry that weighed me down. Literally and otherwise. ( How much does a bikini weigh, anyway!)
Piloted by a lady first officer, the plane ( a Cessna Caravan-Amphibian) was a compact 9 seater, single engine turboprop, high wing aircraft . We took off from the regular Port Blair runway and landed in the waters around Havelock ,20 odd minutes later. It was like a motorboat upon landing as it gently taxied us to the jetty. A rather eventful journey by jeep ( the events being pot holes ) got us to our resort, Barefoot.
Nestled in nature, among tall trees our cottage had all the trappings of modernity. Except those that make you a slave. No mobiles and no television.
We caught a beautiful sunset with crabs for company , and made our way to the lounge for some live music. ( All common areas at the resort including the lounge and dining area, need patrons to be without shoes- thus ‘Barefoot’). The wine made me go up and sing La Isla Bonita with the singer much to the embarrassment of the Husband, and much to the amusement of fellow revellers.

Day 2
Even though we were up at 6 AM, the sun was rather high up . So we decided to switch to Yangoon time( GMT + 6.5) to maximise the day light hours. ( One time zone for a country of India’s expanse has always baffled me). We had a nice cup of Masala tea( I always carry my tea bags when I travel). And then felt the need for coffee. However what I got was tea flavoured coffee as HE thought it was fine to make instant coffee in the same mugs used for tea. Now I know the origin of the word toffee.
After a morning spent diving and an afternoon on the beach photographing ( and luring out of shells) crabs we got cleaned up to meet @womanatics . If it wasn’t for her help in getting our sea plane and boat tickets sorted, not to mention her planning our itinerary, our trip may have had not as nice a flavour. We were pleasantly surprised to meet Surbhi(@womanatics) and her friend Sakshi a young SDM from the North & Middle Andaman District. Sakshi was 25 and had cleared her IAS exam at 22! Meeting both these spirited young women was so inspiring . Surabhi was an engineer who had quit her job to join her DC Husband in Andamans 3 years ago. Tea went on till dinner and the evening ended with everybody eating too much dessert! 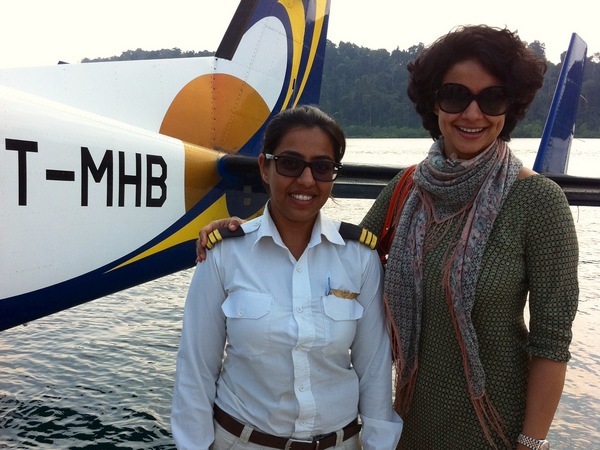 Day 3
The diving bug had truly bitten HIM. We were up at 5( me rather reluctantly) to head to the Dive Centre . The pain of rising so early on a holiday ( partly lessened by the fact that we were operating on Yagoon time) melted away as I sat sipping tea on the small deck outside the cottage listening to the chirping of birds. ( Despite not being ornithologists, we were able to identify 15 different bird sounds.{bird sounds} The fact that we couldn’t identify which birds they were, was testament to the fact the we were indeed not ornithologists.)

We drove to the dive centre with our faithful friend Sanjiv in his Naya Commander jeep. In order to make sure that our breakfast remained in our stomach, we chose to sit in front with him. The dive was spectacular and incident free( unless having had too much lead weight added to my belt counts as one). We came up exhilarated . The nitrogen in our blood probably had a part to play. From the time we bid farewell to our instructor Poonam, till we finally boarded the Makruz, things happened in a flurry. Rushed to hotel, rushed shower, rushed lunch, rushed trip to jetty, rushed to board ferry- only to find ourselves seated on the least exciting seats in the cabin. Surabhi had advised us to take seats on the starboard side so we could see the sunset (1700hrs IST), but we were in the centre block.

Upon reaching Port Blair we rushed to the Cellular Jail to witness the beautifully produced Sound and Light Show. The show chronicles the history of the jail known as the dreaded Kala Paani, and it will bring a lump to the throat of even the most stone hearted!! Drained physically and emotionally( thanks to the Show) we hastily made our way to the Fortune Bay Resort abandoning plans of dinner in the city, hoping for an early night. The hotel appeared to belong to the colonial era with generous use of wood and white paint. And I marvelled at the effort it must have taken to maintain and preserve its heritage. I was a bit crestfallen to discover that the hotel was only 3 decades old. Well, in their defense I’d like to add that they equipped the bathrooms with the whitest towels I have seen in a long time. However I would not order their tomato soup again. 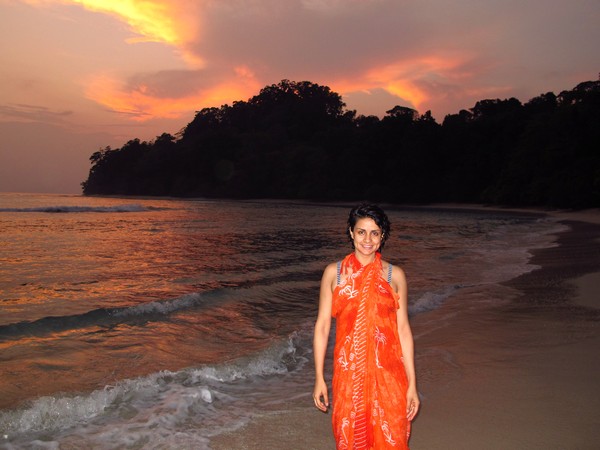 Day 4
Well rested after a 12 hour sleep(yes 12) we decided to explore the Cellular Jail again, this time by day light. The complex is immaculately maintained and punctuated by bits of history at every corner. In fact it is actually a museum minus the boring things that the latter sometimes has. I would recommend visiting the jail in the day time and THEN watching the show in the evening. We drove around the city, had coconut water and made our way to the airport. As I boarded the plane I promised myself that we’d come back again soon, for a much longer time and with the rest of our adventurous family .

Things to know
1. Total of 572 islands, only 37 of which are inhabited, containing a population of five hundred thousand people.
2.There are no Cinema Halls in A&N. No DTH either. And news papers come a day late.
3.Hindi is spoken widely all over the Islands. Bulk of the population comprises settlers from Bengal and Tamil Nadu.
4. Mobile Internet works intermittently, only in Port Blair.
5. Electricity is supplied by generators- government or private.
6. Most fruits and vegetables are brought in from the mainland, subsequently making them more expensive.
7. ATMs are few and work erratically.
8. Mosquitoes are present in abundance. Good to have your personal supply of repellent.
9. Best time to visit is from November to April.
10. For more information visit Surabhi www.knowandamans.com