An Audi Q5 for Gul Panag 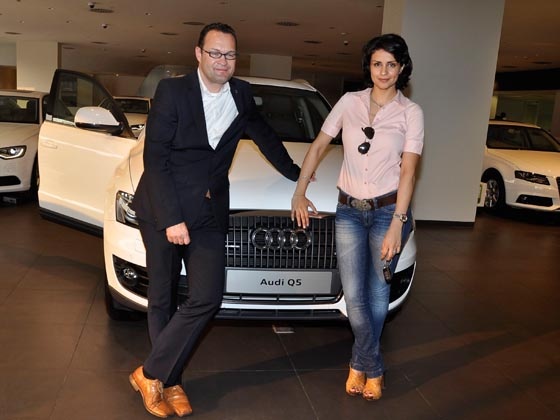 A winner of the Miss India title 1999, Miss Beautiful Smile and ranked amongst the top 10 in the 1999 Miss Universe contest, Gul Panag has come a long way since then. Her strong, notable and very unconventional roles in movies like Dor, Dhoop and Manorma Six Feet Under have put all the spot-light on the actress.
May be a recognition of the same, Audi has presented her with a brand new Audi Q5. Audi has a long list celebrity users in India, which include John Abraham, Sanjay Dutt, Bipasha Basu, Aamir Khan and Katrina Kaif. Michael Perschke, Head, Audi India presented the Audi Q5 2.0 TDI to actress Gul Panag at the Audi Mumbai West showroom.
This all new Audi Q5 borrows heavily from its bigger sibling, the Q7 in terms of design and stance, however its smaller proportions means that it is better suited for our crowded and slightly narrow roads.
Hope, she enjoys driving it around the Mumbai roads with car’s plush interiors and uber-cool gadgetry that make it a breeze in city traffic. With its 2.0 FSI and 3.0 TDI engines coupled with Quattro permanent four-wheel drive, it also packs in decent off road capability making it a great all-rounder. The car ranges from Rs 39.8 to Rs. 45.98 lakh (ex-showroom Delhi).