Treading towards the non-glam path

Home / News and Media / Treading towards the non-glam path 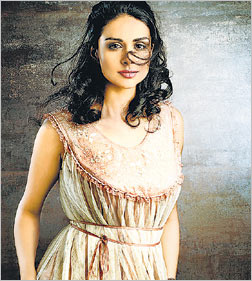 You are hardly surprised when Gul Panag declares that she couldn’t relate to the character she plays in Navdeep Singh’s ‘Manorama Six Feet Under’ opposite Abhay Deol.

“Nimmi is one of those millions of middle-class Indian housewives, who get married at the age of 21 to a man after just seeing his photograph. These women give birth to a child in nine months flat, settle down to routine chores and are hardly empowered. So bad!” says Gul at rapid pace.

She certainly must have seen a different upbringing considering her army background? “That’s true. My background has allowed me to make my own decisions, with no questions asked. Nothing was forced upon me,” she shoots.

So was it hard to enact ‘Nimmi’? “This is where an actor’s strength comes in,” explains Gul who has worked in diverse films like ‘Dhoop’, ‘Jurm’ and ‘Dor’ so far.

After ‘Dor’, one expects her to be natural in ‘Manorama’ too, which comes very close to reality. “When you are doing jhadu-katka at home, you can’t have the lady in a glam avatar with chiffon sarees,” she.

Should this make one believe that Gul would continue to be seen in more non-glam avtars? “I will don a persona as required by the character I play.

That’s why in Atul Agnihotri’s ‘Hello’, you will see an altogether different Gul. For a young woman working at a call center with a high disposable income, my character could afford to be glam, right?” she counters.