Home / News and Media / Auto Expo: Stars grace Audi party
The 2012 New Delhi Auto Expo has been star-studded since its inaugural day. Audi’s stand was the centre of attraction on the first day of the mega auto show, where we saw the company display its new sedan, the Audi Q3. Bollywood star Katrina Kaif had pulled the covers off the Q3, cementing her association with the automaker. Katrina commented, “I am officially part of the Audi family now. As an actor, we have to travel a lot and so cars are an extended part of us. The choice of car reflects our personality.” 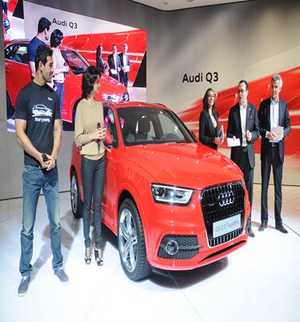 The German manufacturer also organised an evening party on 5th January 2012 to mark the successful unveiling of this car, which has garnered appreciation from all quarters. The Audi Party was also attended by other Bollywood stars, including the dashing John Abraham and the beautiful Gul Panag. We saw them appreciate the subtle elegance of Audi cars at the stand and express their enthusiasm and appreciation for the Audi cars showcased at the stall. As a matter of fact, we believe that Audi has attracted more celebrities than any other car manufacturer in India, from Ravi Shastri, the cricketer, to Salman Khan, the bad boy of Bollywood.