Be fit, be a winner

The multi-faceted Gul Panag says it’s easy to juggle her various passions. Her success and energy is all down to one thing – fitness 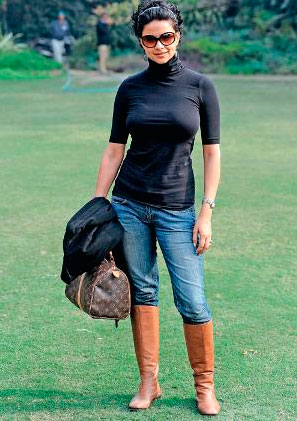 She’s an avid biker and traveller, runs a production company, acts in films and is a member of the Aam Aadmi Party. Gul Panag is many things rolled into one – but it’s her passion for fitness that ties all her interests and activities together into one happy bag of endorphins. Recently in the news for co-founding MobieFit (with Gourav Jaswal), a venture focused on fitness through mobile applications, the 36-year-old is “taking fitness advocacy” to the next level through the venture.

“No matter what I am doing or where I am, the conversation ultimately becomes about fitness. I end up talking to people about what they can do. The company is an extension of the informal counselling I’ve been doing for all these years,” she explains.

Having done “small courses” over the years, Panag says it was a question of ‘when’ rather than ‘if’. It bothers her when people think achieving her kind or fitness level is tough. “I’m always convincing people that it’s really easy. I’m just taking it to the next level,” she explains.

Their flagship offering, First Run, is an app designed for beginners who want to take up running. Why running? “It’s something I can just take off and do without even thinking,” she says, adding, “But it wasn’t always like that”. Forced to run 5km every day as a 15-year-old by her “super-fit dad”, Panag says she would have appreciated some help on how to do it at the time. The app does just that, guiding novices on how they can go from walking to completing a 30-minute run gradually. What’s unique, says Chief Fitness Officer Panag, is a Voice Coach feature in her voice. “I take people through their routine – I prepare them to walk for five minutes, start running in 30 seconds and so on. I even help push them through with motivational lines like ‘just 30 seconds more’, and so on,” she explains. The app also works for those who run on the treadmill, taking them through the speed and resistance they need to set.

That the pursuit of fitness is second nature to her is obvious. She goes into detail about time-based training as opposed to repetition-based training (“the number of crunches you can do in a minute will be different from what I can, but the time remains the same and will improve as your ability does”, she explains), and about what physical fitness means to her. “It’s not about fitting into size 26 jeans or a physical goal,” she believes.

Fitness, which is the thread that binds all of Panag’s interests and activities together, to her means the physical and mental capacity to “do things”. It is what keeps her going from 6 am to 10 pm on the campaign trail, run three half-marathons a year, run her production company, travel, and still have time and energy for her husband at the end of the day. “My mind gets de-cluttered and I’m filled with endorphins. Fitness is no good if you’re too tired to accompany your partner to a movie at the end of the day; it’s the ability to live your life to the fullest.”

And with the energy and motivation she gets from her workout routine, she likes to pursue multiple passions, calling it her secret to success. She lists the findings of a study wherein it was found that people who pursue a profession single-mindedly rise to mid and senior mid management. “But the people who rise to the top are multifaceted – they have a skill set that comes from activities beyond the workplace. Having interests outside the workplace is the key to success in it,” she says, citing US Presidents with a penchant for fitness. “You think Clinton and Obama have the time? They make the time, and it makes them successful at what they do.”

From being an early tech adopter (“I carried a palm pilot back in the day, had an electronic diary to enter contacts and subscribe to tech magazines”) to launching a company that’s leveraging technology to help you get fit, it’s been quite a journey. And none of it would have been possible if not for her fundamental interest in health. “It’s the thread that makes everything else possible. If I wasn’t as fit as I am I wouldn’t be able to do everything else,” she says. And that is her mantra for workplace success.