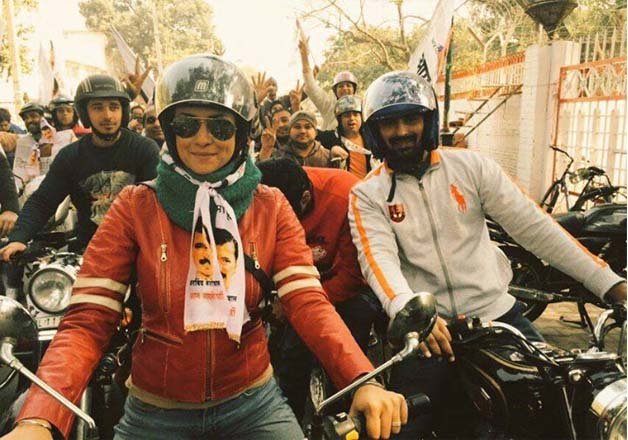 Bollywood actress, former Miss India and now Aam Aadmi Party worker Gul Panag campaigned for her party today riding a bullet in Krishna Nagar’s Geeta colony.
Clad in red leather jacket, helmet and jeans, Gul lead a pack of trailblazers and attracted hundreds of people in the constituency from where BJP’s Chief Ministerial candidate Kiran Bedi is contesting.
Holding a bike rally she called for women to come onto the streets and take place as equal stake holders as men. She asked them to join her in their bikes and scooties.
“We believe that women are equal stake holders in society, they play just as important a role as men do”, Gul said while waving to people as she rode her bike during the rally.
Though Panag had finished third in Chandigarh and her party could not secure a clean majority in their debut, she insists that Kejriwal’s candidates are better equipped to handle Delhi’s rising crime against women
While AAP’s bike rally attracted huge masses, Bharatiya Janata Party’s (BJP) chief ministerial candidate Kiran Bedi too addressed a gathering today in her Assembly constituency of Krishna Nagar. While campaigning the former tough cop became emotional and said that she was overwhelmed by the love she has received from the crowds.