Have feet, will travel

Home / News and Media / Have feet, will travel 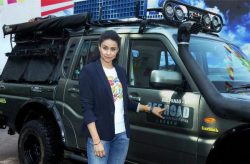 ‘Take memories, leave footprints’ is a defining quote for avid traveller and multi-talented actor Gul Panag. Along with singer and songwriter Bishwadeb Bhaumik aka DEB, she has recently featured in a single titled Rastafari, which tugs at the emotions of a traveller for whom getting out there on the road is almost like meditation. Gul took the journey all the way to Leh by road which captured the dawn on hills when the brown mountains get drenched in golden colours in the backdrop of a pure blue sky. The song’s video also featured the drive to Neruba valley which is across the world’s highest motorable pass, Khardung-La, what is considered as a dream travel for every travel freak which leads to the famous Pangong lake which is surrounded by the mountains and is bluer than the sky.

Here Gul talks about her experience passion for travel, ethnic identities of the people and independent music scene in India.

What changes does travel bring to a traveller?

I come from an Army background which exposed me to different part of the country and since childhood, I have inculcated travel as a hobby. It widens the horizon of thinking. In our daily life where we are surrounded with stress and work pressure, it gives you a unique perspective of your own life. When we are in a complicated situation, we become what I term ‘Me centric’ i.e. we only thinks about ourselves but when we travel, we realise that we are insignificant and there is a big world outside. I still remember childhood camps in Himachal Pradesh which I used to do with my family in summer holidays which built team spirit in me and deepened the bond within the family. So in a way it could be therapeutic if you practise it aesthetically.

How do you connect with a new place you visit?

I believe that if you want to escape your routine life at a place for long time, you should visit a place which you never went as it will enthral you. I connect with the new place by soaking myself in the culture, the tradition and relishing the food which has the locally grown ingredients. I take out time to talk to the local people and in my view language is not a hurdle as you connect with someone with emotions not words. Sometimes sitting together and feeling the presence is enough to get another person’s feeling.

Due to over commercial exploitation of places, the ethnic identity of people and the natural beauty of many scenic spots are in danger.

That is a worldwide issue which is there because of the globalisation making the world a smaller place as well as giving new avenues to people from distant areas like Ladakh where the only source of livelihood is tourism. I am not an anthropologist but I must say that if cultures are lost, the heterogeneity will also be lost. Heterogeneity must be celebrated and any kind of over commercialisation which is harming the identity and the ecosystem of the place must be stopped.

The song Rastafari has compelling visuals of the landscapes and roads. How do you decided to team up with singer Bishwadeb Bhaumik for the song?

I had shot a documentary series for Discovery Channel called Off Road with Gul Panag where I had travelled all over the India. The experience on the trip was very soothing and we wanted to make it memorable by giving music to it. As Deb had also given the music for the documentary, he came up with the idea of making a song with the visuals mainly from astonishing mountains and roads of Ladakh which was in the documentary. The music has the touch of regional folk music making it more connected to the place. I believe that the video will refresh those who are stuck in the monotonous routine of everyday life and act as a musical relief almost as a wave of fresh air.

Digital platform is giving a platform for the new talent, especially in music industry where singles are topping the charts. How do you see the phenomenon?

I believe that now the time has come where every one is given a chance to show talent. When we were looking for someone fresh and enthusiastic for giving music to documentary, I met Deb, a talented musician who works hard and has a deep knowledge of music and due to his passion for work I decided to go with him. I think there is a vast space left apart from the Bollywood situation-oriented songs and new artists are doing amazing job in making new content which is happily accepted by the new generation. The trend is very positive and I am sure it will go far.