Bollywood actor, biker and pilot on how she balances the many interests in her life

Model, actor, biker and pilot Gul Panag wears many hats, and with aplomb. It all began with a beauty pageant. She shot into the limelight by winning the Miss India title in 1999. She also won the Miss Beautiful Smile title at the event. 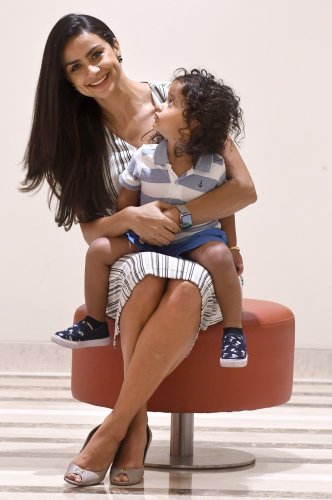 Her interest veered to politics, and she was the Aam Aadmi Party candidate from Chandigarh in the 2014 elections to the Lok Sabha. She did not win, but her interest in politics remains as keen as before.

Gul takes pride in being outspoken. In an interview with Showtime, she talks about fitness, motherhood and more.

Tell us about your role in the web series ‘Family Man’?
I play an intelligence officer. It is a part that comes naturally to me because I come from a family that has served in the armed forces. The demeanour and body language are relatable. This character is an extension of my upbringing. She is a commando officer to Manoj Bajpayee. We share interesting dynamics. My character speaks little but can really intimidate people. Her minimal use of dialogue sort of unsettles Manoj. I appear in only three or four episodes but I am overwhelmed by the response the series has received.

And what are you doing in ‘Bypass Road’, releasing on November 1?
I tend to gravitate towards roles that are bold and strong. In this film, I am an antagonist and my character has shades of grey. I play a woman who knows what she wants in life. What I like about this film and a couple of other projects is that they are in sync with who I am in real life. It is gratifying to be cast in these parts. I have chosen to be a nonconformist. People are now recognising and casting me for what I believe. That is really surprising.

Do you also watch what you eat?
You must be cognizant of what you eat. I have heard a lot of young people say ‘I exercise so I can eat anything I want.’ That’s not true. Eating anything you want after exercising automatically puts those kilos back. If you don’t follow a balanced input-output equation, you are going to put on weight. It’s just like how you shouldn’t spend more than you earn. My lifestyle is dictated by my means. The primary role of food in our life is nutrition and the finite quantity that you eat depends on your weight, gender and height.

How do you balance your personal and professional lives?
It’s not easy. One must learn to compartmentalise one’s life and fiercely protect these compartments. Both my husband and I are pilots. He is a pilot for a living, and I am a pilot for fun. Sometimes, I am at home and around him but I am neck-deep in work. I may be either writing a script or recording a video. The boundaries between work and home are sometimes difficult to guard because I do too many things at a time. So we have, over these years, been using aviation analogies! It really helps because both of us are pilots.

What has flying taught you?
Flying has taught me to compartmentalise better. I had difficulties prioritising. There are so many things around me that I sometimes get overwhelmed. I am an actor, I run a production company, I have a company that makes fitness applications, and I am a mother. I’ve realised that having a timetable helps one get productive. You have learnt to make time for everything that you need to do, else you will burn out. I switch off my phone’s data at 8 pm every day and I don’t switch it back on before 11 am the next day. If you check the phone first thing in the day, your agenda is set by random messages in your inbox. You should get to decide how you want to set your day.

What was it like working with Jimmy Shergil in ‘Rangbaaz 2’?
Jimmy has been a revelation. Though I have known him socially, over the last two months, I have realised he is an introvert who likes deep, long and meaningful conversations. We have a lot in common in terms of our backgrounds, we both went to college in Patiala (I once bunked college to watch ‘Maachis’). He is a fine actor. I feel as an actor, my job is mostly reacting to my co-star. If the other person is doing a fine job then there is no way you cannot do a good job.

Gul’s pilot life
Gul started her training at the Patiala Flying Club where she did only 10 per cent of the training. The rest was completed at Chimes Aviation Academy in Sagar, near Bhopal in Madhya Pradesh. She got her licence in 2016 and has been flying for about three years now. Gul is a ‘hobby pilot’ who flies every weekend at the Juhu airport and returns to Sagar, twice a year, to do long cross-country flights. “As a hobby pilot, I do short flights. The longest was a 250 nautical mile flight. I fly at 1,000 ft. I go up there just to enjoy the view,” Gul tells Showtime.

‘My son brings out the best in me’
Gul’s son Nihal has just turned 20 months. She says after his arrival, she has started choosing quality over quantity. “I fiercely guard the time with my son. The first quarter of my day is devoted to him,” Gul tells Showtime. How has he changed Gul’s life? “He has forced me to be the best version of myself,” she says. In her words: “Children learn by observation and not by what you tell them. So, if you are trying to be all nice and sweet to him but lose your cool with other people, then he will think that is a normal way to respond. Sometimes, when people make me angry, I try to ease around and make sure that I am balanced in my response,” says Gul. She hopes to teach Nihal “good values” and bring him up as a balanced human being. “The rest depends on his destiny and calibre,” she says.