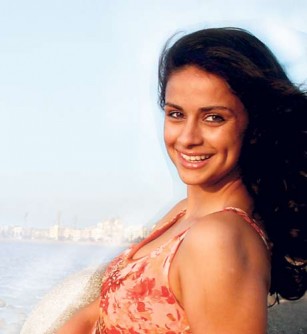 Known for simple sweet looks till now, Gul Panag has suddenly become this hot diva overnight. The former Miss India, who has been a part of so called serious films like Dhoop, Dor and Manorama Six Feet Under was never seen in such a sensuous avatar before.

With this image makeover, a shift in career was quite natural then – from a profound actor in off-beat films, Gul has now chosen to go glamorous and commercial in her work.

Tell us about your latest film Hello?
The film is based on Chetan Bhagat’s best seller One Night @ The Call Centre, a book that I have enjoyed reading the most. Technically the film revolves around 5 different characters which are played by Sohail Khan, Sharman Joshi, Isha Koppikar, Amrita Arora and Sharad Saxena. I am playing Priyanka opposite Sharman Joshi, an actor I have been huge fan of. The interesting part of this character are its grey shades. This lady is a glamorous woman who is quite aware of her beauty and its power – which she uses to her benefit.

You have recently appeared in quite dare-bare avatar for a popular men’s magazine? What made you do it?
I have not done anything which I have not done before. I shot in a swimsuit for Miss India in 1999. This magazine celebrated the essence of my personality so when they approached me to get down to my night suit, I had no issues. They celebrated my aura, my beauty and my persona and I just loved it.

Are you following the trend of image makeover?
I don’t want to follow any trend. I have managed an image of a critically acclaimed actor but I can look hot at the same time. In fact, I did one of the most sensuous scenes on-screen which included a kiss and love making both. But that’s a part of my job and I carried it out in a dignified manner. Which other actor can you name who is hot enough to pose for a men’s magazine and has the credentials of being a critically acclaimed actor too?

How do you go about selecting your scripts?
I think there is some gut instinct that works for me. It’s a bit of heart and brain decision. For me my role has to be the critical one, it shouldn’t be like an appendix that one can do without.

You recently quoted that you are quite disappointed by the role of media. Comment…
Yes because many things which are quoted in print are referred out of context. But it doesn’t make a difference to me any longer. I am a very self-absorbed person and do not have time to judge any body’s action or statements.

What are your upcoming projects?
I have three projects lined up. One is a Rajat Kapoor’s romantic comedy called Love Rectangular, where I am working with Ranvir Shorey and Purab Kohli. Another is Hello Darling, which is also a comedy as also Parvati Balagopalan’s Straight.

You have worked on the small screen previously. Would you do it now?
Why not? I am discussing two-three serials at the moment, but nothing is finalised yet.