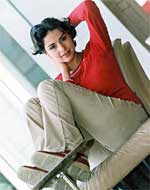 Take some of her goals- Designing multi-media packages for dog owners, a doctorate in Developmental Economics. A career in the media (inspired by her newsreader aunt, Komal GB Singh). It doesn’t stop there. As she says, the possibilities are endless. Former Miss India-Universe 1999, Gul Panag made shades of sunshine in DHOOP and hopes for somemore in Vikram Bhatt’s JURM.

Gul Panag hails from Delhi and has done her MA in Political Science through correspondence. Gul plans to do her Ph.D in International Relations too. Gul is an early riser; her day starts at 6 in the morning with a swim and then she completes her household chores. Gul finishes with her daily activities like grocery, shopping and going to the Bank, in the morning itself, and then has ample time to concentrate on her other activities.


Gul Panag didn’t have the best of the time in DHOOP though her Star Plus serial KASHMIR had created quite a rave; unfortunately it was banned. So when Vikram Bhatt gave her the script of JURM, Gul instantly agreed to it though she said the script was to her liking. Shooting of the film would begin from January 2004 in Kuala Lumpur.

Gul Panag assets are her composure and strong verbal skills. Gul has been quite a debater in her college days. Her constant companions are Palm 505, Nokia Cellphone and her weekly lists. These lists help her to keep a track of the activities and in her leisure period, she listens to Buddha Bar music.

Gul Panag believes in a strict time management; she thinks each and everyone should maintain a weekly list, since, if one can follow it then half of the battle is won in life. Gul plans to start by using her strongest asset – her ability to express her-self articulately and eloquently – in various national and international fora.

Gul Panag’s definition of beauty is not just about having a good body and a beautiful face. Anybody can have that. It is about to be balanced – physically, emotionally and spiritually. She elaborates, “It’s the intellect that’ll sustain you, not beauty. After all, how long will beauty last?” Wise words to conclude.