July 29, 2010, (Sawf News) – Gul Panag can turn the heat on without pushing buttons, or opening them, as was evident at the music launch of her long awaited film Hello Darling at Hotel Courtyard in Andheri, Mumbai, Tuesday evening, July 27.

She was accompanied to the event by the two other leading ladies in the film – Celina Jaitly and Eesha Koppikhar.

Not many celebs can carry off a cropped, nape covering hairdo like Panag does. Styled in a bouffant top, her face framing bangs did wonders to her eyes and brought out the softness in her facial features. 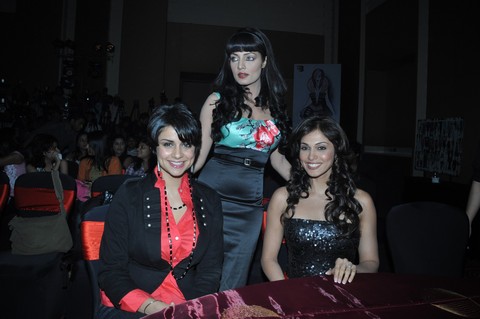 She kept it real looking the most at-ease of the three sexy chicks.

The Royal Enfield biker girl not only rocks a good style and is a fine actor, but a very animated, out-of-the-box thinker in real life.

The 31-year-old army kid has a dedicated Twitter following. She keeps her fans engaged with her diverse interests, airing her opinions on politics, technology, military and social welfare.

Manoj Tiwari helmed comedy Hello Darling has been in the making since 2008. The film additionally co-stars Javed Jaffery, Divya Dutta and Chunky Pandey. Its music has been scored by Pritam.

The film, due in theaters on August 27, deals with sexual harassment at workplace.