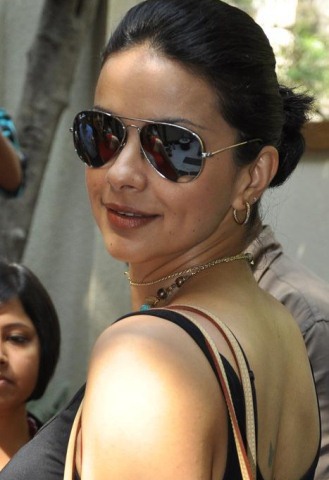 “I play a crime reporter. The only female part in a male dominated film. It’s a very critical character,” Gul tells Sawfnews.com exclusively.
Gul has always been picky with her Bollywood roles, preferring to focus on philanthropic work and adventure sports till the right one comes along.
“I have always been very clear in my approach to films. I only do stuff I find interesting.. I have too much going on in my life to do it any other way,” says Gul.
When ATC2 was offered to her, it struck a chord
“I have always enjoyed working with RGV. When it comes to cutting edge stuff, he is it!” Gul says.
“I am also looking forward to working with Nana Patekar!!” she adds.
Gul Panag, a former Miss India (1999), has other exciting projects lined up other than ATC2. Not content with running marathons, she now plans to organize an all terrain racing event.
“On the other fronts- entrepreneurial stuff is going great guns. I enjoy doing off beat stuff. Adventure and adrenalin. So all my ventures including an all terrain racing event are in that space!” Gul shares.
ATC2 is a sequel to the 2004 encounter cop drama, Ab Tak Chhappan, produced by RGV.
Besides headlining the sequel, Nana is reportedly also directing it. He earlier directed the 1991 film Prahaar (1991).