Home / News and Media / Gul Panag’s dog is on Twitter! 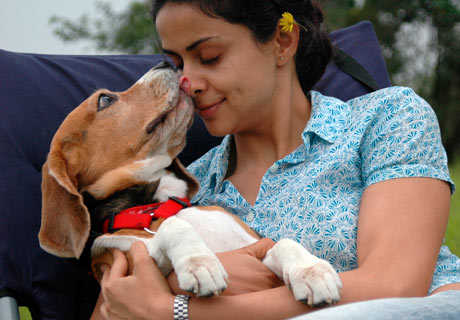 Many celebrities are hooked to Twitter, but Gul Panag is taking it to a new level. The Bollywood actress has apparently opened a Twitter account for her pet dog Milo.
Gul Panag (http://twitter.com/gulpanag), along with Mallika Sherawat (http://twitter.com/mallikala), is one the most active Bollywood celebrities on Twitter. While Gul has almost 9,000 followers, Mallika has about 7,500 people following her on the popular micro-blogging service.
Gul had been regularly tweeting about her dog Milo and last night Milo ‘posted his first tweet’.
The Beagle’s bio on his Twitter account (http://twitter.com/super_milo) reads, “I am a dog, named Milo by my human ‘master’ Gul Panag. I lead an adveturous (sic) and exciting life. I rub shoulder with the high and low of society.”
Celebrity pets are a big draw on the Internet. Amitabh Bachchan also writes about his pets on his very popular blog (http://bigb.bigadda.com). Big B’s post on Shanuk, his Great Dane, generated a lot of interest in the online world.
International celebrities, like Andy Roddick and Miley Cyrus, too keep their fans updated about their lives with their pets via Twitter, complete with links to images.
Prashant Pawan from Mumbai, tweeted, “what?!?! @gulpanag ‘s dog has a twitter account! Now I’ve seen it all…” To this Gul replied, “no dude you havent:))”
Well, what’s next?