The former Miss India and actress, Gul Panag subscribes to the idea that one has to have a loftier purpose in life.
This glamorous celebrity is also an activist, a lesser-known side of her that is coming to the fore only now. Gul is the founder-member of an NGO that works towards the betterment of the underprivileged.
Gul divulges, “I run ‘The Col. Shamsher Singh Foundation’ set up early this year in the name of my grandfather. This organisation essentially facilitates bringing together public and private partnerships to promote inclusive development. We design programs with our partner NGOs and allow people an opportunity to work for the lesser privileged sections of society.” 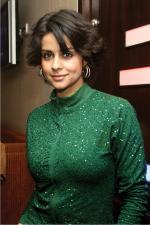 Explaining what motivated her, Gul says, “I would constantly meet people who were concerned about society – they wanted to make a difference but did not know how.” This gave her the idea to set up an NGO that would act as a channel. She asserts, “Essentially, we are the answer to people who are trying to find a way to do something for society but don’t know how.”

“We are running a programme in Chandigarh against female foeticide and another in Punjab for providing 1,000 scholarships for BPL (Below Poverty Line) youth”

Gul laments, “The sad thing is that the privileged section doesn’t even know what being underprivileged means. Only when you take a peek into their lives do you appreciate what you have and how little you have to contribute to make their life easy. Even if you spare one day in a month or ten days in a year to them, it will do them good.”
Gul, who thrives on being well-informed, quotes figures and statistics. She states, “About 50 million people in India lead privileged lives. It is a very small number considering India’s population is 1.2 billion. The idea of my volunteer programme is to sensitize privileged people to the lives of the underprivileged. Once we achieve that to some level, their consciousness will be evolved in a manner where they will be able to help people out.”
An optimist, Gul is extremely hopeful about the scope of her flagship project. She proudly claims, “In Chandigarh, we are running a programme in partnership with the Government against female foeticide. Similarly, we are running a programme in Punjab for providing 1,000 scholarships for BPL (Below Poverty Line) youth.”
But Gul is not ready to go knocking at Bollywood’s door right now. She opines, “I think celebrities have a very limited role to play. The best they can do is to amplify the cause. But if the machinery and the system isn’t developed completely, then it is bound to fail.” She believes that the programme is still at the nascent stage and there is a lot to be achieved. She emphatically states, “When the programme is up and running, I will approach people who can make it grow.”