I can even look good in a bikini 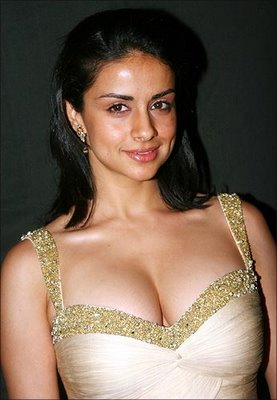 MUMBAI: Former Miss India Gul Panag, mostly seen in de-glamorised acting roles, recently caught public attention by posing in a black lingerie for the cover page of Maxim, a magazine for men. Gul said she did it to show off the “glamorous and real side” of her personality.

“It was not for a change in my image. I am very happy to have the image that I have. I am associated with a certain type of work and I don’t want to change that ever. But what is important is that people should understand that what they see on screen and what I am are two different persons,” Gul said.

Gul has received critical acclaim for playing offbeat roles in films like “Dor” and “Manorama Six Feet Under”, in which she was seen mostly in Indian attire.

“I can look good in a bikini or any other sexy outfit or equally convincing in a nightie. That’s the job of an actor,” she added.

Commenting upon her roles, she said: “I believe that I’m extremely versatile as I can do power packed performances as well as look good as and when required. I don’t want the people to be confused that the role that I have been playing in my films is what I am in real life. It’s just the man who is playing the villain in films is not bad in real life.”

What made you say yes to Maxim?

“Why not? It’s the highest selling men’s magazine in the world,” she said.

Asked about her future plans, she said: “It’s not that I’ll be doing more glamorous or power packed roles. It’s about the offers. Glamour cannot be substance to a role. However, in most of my forthcoming films, I have glamorous roles.

“In ‘Hello’ I am glamorous. I have two more films – ‘Straight’ and ‘Hello Darling’ – in which too I have glamorous roles.”

The actress said she is playing a modern, urban young woman in “Hello”.

“My character is neither black nor white. It has a huge amount of grey in her. In the story, she is stuck in a conflict in choosing between love and practicality.”

Gul said she liked the story and her role in particular. “I never sign a film unless and until I am convinced with the story. In this case, I knew the story beforehand because I had read the book earlier. It is an extremely interesting story and I hope people will like me in the role.”

Gul said she enjoyed most working for “Manorama Six Feet Under”.

“It is closest to my heart and I enjoyed working in it the most.”

Among the newcomers, Gul finds Imran Khan as most dynamic and wants to work with him.

“I think Imran is extremely talented and the most promising among the newcomers. I came to meet Imran for a short while during an audition where we interacted and I found him a highly sensible and dynamic actor. If given a choice among the newcomers, I would definitely choose him,” she said.