‘I can’t drag glamour into every character I play’ 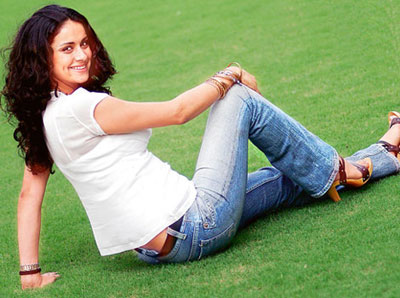 Winning a beauty pageant often becomes a ticket to Bollywood. It was no different for actor Gul Panag. But unlike her predecessors she never eyed a glamourous debut and till date the beauty from Delhi enjoys playing characters of substance.

If her deglam look in Nagesh Kukunoor’s Dor last year earned her critical acclaim, her forthcoming release Navdeep Singh’s Manorama Six Feet Under once again proves her fetish for non-glitzy roles. She plays Abhay Deol’s wife in the film and portrays an extrovert and extremely independent person.

“It is a volatile character. The series of incidents are very unpredictable and that is what makes Manorama… different,” says Gul.
She will be seen playing a similar role opposite Sanjay Suri in Anubhav.

“I want to stay in this industry for at least 15-20 years and for that I can’t drag glamour into every character I play. I can look glamourous at film premieres and photo shoots. Then why films?” she asks.

The actor, though, feels how you look on screen depends completely on the script. In the year-end release Hello, where she plays a call-centre executive, Gul will be seen in a new look.