I have always done films that I am comfortable doing 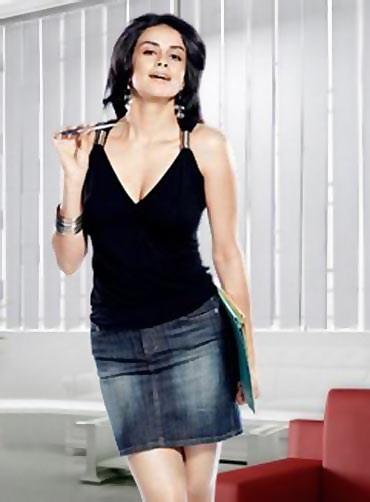 Gul Panag claims that she has never been sexually harassed in the real world. However, she endures it silently in her upcoming film, Hello Darling.

“(My character) Mansi does not do anything about it. She suffers silently,” Gul says. “But if it happened to me, I would probably physically harm the person, and definitely take the matter to a higher authority,” she says.

In that sense, Gul says that she does not identify with her reel character.

The actress, who gave a breathtaking performance in Dor with Ayesha Takia, claims that working with actresses doesn’t always result in catfights. “I have known Eesha since a long time, so it was good working with her. I have a good relationship with Celina too. We are in one frame in 90 percent of the film, so we had to spend time with each other automatically. So by default, we started enjoying each others’ company,” she says.

Gul claims that she has yet to come out of her comfort zone in the movies. “I have always done films that I am comfortable doing,” she says.

And that includes her next film, Turning 30. It is produced by Prakash Jha, and directed by his long-time assistant Alankita Srivastav.

Turning 30 tells the story of a woman, who turns 30 and how everything in her life falls apart. “It’s a chick flick,” Gul explains. “Interestingly, while making this film, the entire cast either turned either 30 or were in their early 30s. I turned 31; the director, cinematographer and costume designer turned 30 The entire crew was young. The oldest crewmember was Rajesh Pandey, at 41.”

Ironically, this film is not meant for the average Indian audience. “Turning 30 is targeted at urban women, not for places like Dahisar (in suburban Mumbai), no offence meant,” Gul says.

“The Turning 30 phenomenon will only affect women of a certain socio-economic group. Somebody is telling you that your biological clock is ticking and you should get married. This does not apply to non-metro cities where a girl is married with kids by the time she is 30.”

Gul seems to think that the ‘urban woman’ lives only in select pockets of Mumbai, not in the entire city. So the trailer, she claims, was released only in theatres in South Mumbai and suburbs by Versova and Lokhandwala.

“It wasn’t released in Kanjur Marg,” Gul says, referring to a suburb in east central Mumbai, near IIT Mumbai and posh localities in Powai.