Nobody wants to challenge the status quo

Home / News and Media / Nobody wants to challenge the status quo 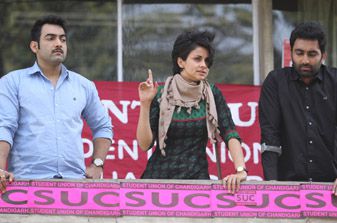 We saw her as the confident Beant of Pollywood film Sikander, storming the male bastion at Panjab University (PU) elections. And, why not, when Miss Panag herself was a post-graduate student at the university recently? Her movie might have gotten lost in the crowd of below-average rom-coms, but with the film, Gul Panag proved that she stands for everything she believes in, on and off-screen. In the wake of PU student elections, the actor gets candid about the position of women leaders at PU and a lot more…
Q. Why have we not seen a woman president at the Panjab University?
A. It’s because nobody wants to challenge or change the status quo; we have made our peace with the system. As a society, we do not like challenging the status quo; even if someone does, we don’t support him or her. Indians believe in heard mentality, that’s why patriarchy still rules.

Q. And how does that apply to the university?
A. There’s no logic to why the university, which has over 75% girl students, shouldn’t throw up a woman candidate. It’s simply because no one wants to challenge the status quo. Why do girls come to college wearing the same kind of clothes they have been the past so many years? It’s because they don’t want to stand out; just blend in. Our culture doesn’t support people who stand out. Our parents tell us, “Beta, aisa kuch mat karna jis se log tumhe pakad le!” Blend in, blend in, blend in! We are not taught to be individuals; we are taught to be sheep in the herd.
Q. What do you believe is going to change the trend?
A. No one wants to challenge patriarchy — the trend cannot change till girls fight back themselves. Basically, we are a patriarchal society by default; women have always been granted the second-grade status. That’s the difference between east and west — though subjectivity still exists in the west, women have fought a long battle. In the US, sexism is socially unacceptable, like racism; you can’t tell a woman she can’t do something just because she’s a woman. Whereas, in Indian societies, women still yearn for a male child, because her son’s marriage will get her a daughter-in-law who would listen to her. Perpetration of patriarchy in India is women. I know girls from ‘well-off’ families who have made peace with the fact that their wealthy landlord fathers are going to give everything to the son. If educated girls don’t challenge the status quo, who will?
Q. Did playing the strong woman character in Sikander help?
A. You saw for yourself what happened with the movie. In mathematic terms, QED — quod erat demonstrandum — people don’t want to watch stimulating cinema. There is, however, enough audience for crappy films being rolled out every second day. Ultimately, who is going to support the change? That’s why we remain the way we are. We have to understand the psychology of the nation; we are a nation of conformists. You are taught to walk the path countless people have walked.

Q. What do you predict for Panjab University?
A. I don’t see a bright future for either India or Panjab University at least for the next 40 years. Till the day you don’t start treating your daughters the way you treat your sons, nothing is going to change. These boys who fight PU elections are brought up in ‘munde da culture’ — their mothers bring them up saying they are ‘god’s gift to women’. So, a woman shining at elections is quite impossible.
Q. Do you believe that girls won’t vote for a girl candidate?
A. A woman is a woman’s biggest enemy. Who gives you the toughest time at home — mother-in-law — because she has raised a son, which apparently gives her an ‘upper hand’ in the Indian society. The position of Indian women today is a result of fellow Indian women treating them the way they do.