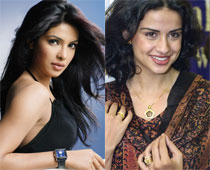 Bollywood is a strange place when it comes to friendships and enmities.
While we are still wondering if there is something more than friendship between Priyanka Chopra and Shahid Kapur, it seems there is a new friendship on the horizon for Piggy Chops.
Priyanka, who is an avid Twitter user, has found her tech-soul-sister in none other than fellow actress Gul Panag who has taken to the micro-blogging site just recently.
It seems Priyanka (PC) initiated the friendship by annoucning to Gul that she has started ‘following’ her on Twitter. She said, ”HEY GUL.. PC HERE.. STARTED FOLLOWING U.. LOVE UR UPDATES.. HOPE U BEEN WELL.. C YA SOON..XOXO.”
To this, Gul replied, “Hellow:-) How is my favourite actress:-)))”
Happy to see a budding friendship, Priyanka said, ”AWW URE TOO SWEET YA.. ME GOOD OVERWORKED UNDERPAID.. THE USUAL.. ;)”
There has been much exchange between the two actresses who seem to be getting along like a house on fire. So while Priyanka Chopra may have lost the friendship of Kareena Kapoor, it seems another, new-age friendship is coming her way.