This appeared in The Indian Express on January 13, 2015 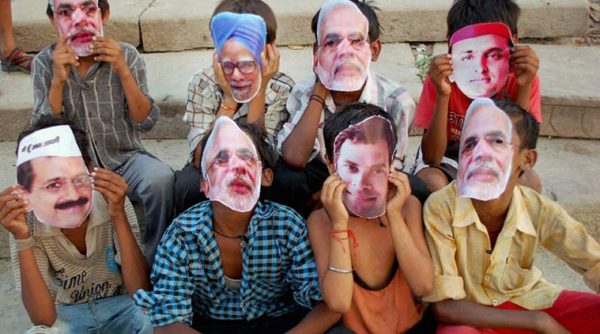 In a country where political awareness and interest levels are at new highs, there is a simple question that few, including the highly educated, have asked: How do political parties actually raise funds to fight elections?

At the root of that simple question lies the answer to many of our complex social, economic, political, governance and moral problems. Our public discourse on electoral spending, if any, is restricted to each candidate’s official limit on expenditure during the campaign. Though there are problems with that limit — and it is often blatantly violated by candidates of major political parties — it deflects our attention from the more important question of electoral funding of political parties, and how those funds, both declared and undeclared, are raised.

As organisations like the Association for Democratic Reforms (ADR) have repeatedly shown, none of the major parties is transparent about raising funds. They have tried hard to avoid being covered by the RTI and have taken advantage of the loopholes in donor-list declaration rules to avoid scrutiny. An amount of less than Rs 20,000 received by a party does not require the identity of the donor. According to the ADR, which analysed data from contribution statements submitted by these parties to the Election Commission and their tax returns, such unnamed benefactors accounted for three-quarters of the funds collected by the Congress, BJP, BSP, NCP, CPI and CPM between 2004 and 2012.

Despite this loophole, major political parties still deal in large sums of unaccounted money in cash. According to newspaper reports, in December 2008, Rs 2.6 crore in cash was stolen from the office of the national treasurer of the BJP. In her column soon after, Tavleen Singh noted that instead of asking the police to investigate the matter, the party hired a private detective to look into the theft. The matter was soon buried and we haven’t even heard about it since. Singh was disappointed by the response of then party president Rajnath Singh and party spokesperson Ravi Shankar Prasad. Both are senior Union cabinet ministers now.

It is not that the Congress is any better. In the run-up to the recent Maharashtra polls, a newspaper reported that a huge amount of cash, at least Rs 10 crore, which was part of the party’s war chest for the Maharashtra poll campaign, was stolen from a flat in Prabhadevi. Not many observers believe the denial of the party leaders and considering that it was again unaccounted funds, there is no chance of a police complaint being filed.

Why do parties need this unaccounted cash? It is this cash that sustains the “petrol allowance” for workers, daily wages of party workers, free gifts for voters, money given to those brought to rallies and public processions, “paid news” and other undeclared electoral practices.

From my own experience as a candidate of the Aam Aadmi Party from Chandigarh during the recent Lok Sabha elections, I can vouch that it is possible to have a completely transparent election account. Before joining active politics, I also mistakenly believed that without “lots of money”, you can’t fight an election. The limit set by the EC on candidate spending, even for someone from a smaller party, is sufficient to run an honest and effective campaign. (While candidate expenditure is restricted and somewhat regulated, spending by the party in a constituency is neither regulated nor has a limit. This gives bigger and richer parties a huge advantage over others.) Further, raising campaign funds honestly and transparently is possible. My campaign was run on the money we raised openly. Transparent fundraising is a sine qua non if we expect our representatives to remain honest during the course of their political life. Because anyone who invests all her savings or unaccounted money from “friends” in an election will eventually need to recover it for a “return on investment”. The seeds of corruption in political life are sown right there.

In an address in Mumbai last year, RBI governor Raghuram Rajan explained the vicious cycle perpetuated by this unaccounted money: “The crooked politician needs the businessman to provide the funds that allow him to supply patronage to the poor and fight elections. The corrupt businessman needs the crooked politician to get public resources and contracts cheaply. And the politician needs the votes of the poor and the underprivileged. Every constituency is tied to the other in a cycle of dependence, which ensures that the status quo prevails.” The AAP has tried to break this vicious cycle by being transparent about its fundraising. The details of every single rupee raised by the party are available in the public domain. It has also tried innovative methods, like paid seats at dinner meetings and tea with party leaders. At one such meeting last year, Arvind Kejriwal raised Rs 91 lakh from donors. When the party took this initiative to raise funds before the Lok Sabha elections, it was criticised by the Congress. Even today, instead of following this transparent model of political fundraising, other parties avoid this question altogether and seek refuge in critiquing the innovative fundraising methods used by the AAP.

The answer perhaps lies in the EC creating better institutional benchmarks. We can take a cue from the way political funding is approached in the US, for instance — where campaign strength hinges on who raises more money — but at least everyone knows the source of those funds. Whether the donation is for Rs 100 or Rs 20,000, it needs to be accounted for. Why should only donations above Rs 20,000 be entered in the books? The BJP is yet to submit its donations report for 2013-14 to the EC, despite the submission deadline being October 31, 2014. The list submitted by the Congress doesn’t have the PAN details of its donors. These parties should be penalised for blatant violation of rules.

Given the heightened public interest in our polity, the time has come to educate the voter about election spending and fundraising. Media and civil society can play a part, but the lead will have to be taken by the parties themselves. Let us hope parties will initiate this process on their own. Because if they don’t, the Indian voter will not forgive them. The writer is a member of the national executive of the Aam Aadmi Party. Views are personal.