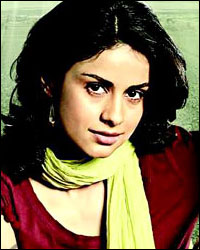 Gul Panag is disappointed with the way a major section of media operates today. As per her, in their quest for finding ‘news bytes’, they sometimes have a question worded in a clever manner, hence leading to celebrities coming up with comments which may lead to a controversy in the making.

“Seriously, so many times it happens that you are asked a question for which you are required to answer in the spur of a moment”, says Gul who would soon be seen in SUMMER 2007, “You may say but only a part of your reply may make a headline which may give an altogether different context. Soon, you find a controversy building up and everyone appears to be lapping it up with glee.”

But then so many tabloids and publications are only thriving on such quotes and bytes. They need something for running the show, isn’t it?

“And that’s exactly the sad point in the entire affair”, Gul says with an exasperated tone, “Earlier there was a tabloid or two that used to run gossip columns but today the scene is entirely different. So many respected publication houses have started getting into tabloid journalism which is disappointing to the say the least. Come on, where is the real news?”

“Of course celebrities are talked about and would be talked about; there is nothing wrong in that”, replies Gul when questioned about the role of media in bringing commoners closer with the world of glitz and glamour, “However, I believe that there should be something worthwhile at least. What’s the point of being talked about for trivial issues or day to day stuff which only qualifies as ‘business as usual’. It all appears pretty desperate to say the least.”

After making a slow but impressive beginning with films like DHOOP, DOR and MANORAMA SIX FEET UNDER, Gul has a packed 2008 ahead with SUMMER 2007 to be followed by Atul Agnihotri’s HELLO, Subhash Ghai’s HELLO DARLING, Sanjay Gupta’s ALIBAUG and award winning film maker Rajiv Nath’s ANUBHAV.