Former beauty queen, fitness enthusiast, and famous Indian actress; Gul Panag did the poster launch of her upcoming project, today. She shared this news over the social media platform, Instagram. The project is titled “Manoranjan.” The poster of the film looks quite appealing. It shows Gul Panag in the attire of an Indian woman, clad in a regular saree, wearing mangalsootr , bindi and sindoor. The film is produced by the actress herself while it is directed by Suhail Tatari. The other actors starring in the film are Satyajeet Sharma, Mihir Ahuja, and Akshita Arora.

As revealed by Panag in the post, the film is the story of a deceptive mind that spins a million spooky tales. The screenplay and dialogues of the film have been written by Sukhmani Sadana while the cinematographer is Akshay Singh.

The actress, who remains very active on Instagram through her posts and stories has urged her fans to wait for more details related to the project which she will be revealing soon. Within a few hours of the poster release, her fans have flooded her post with congratulatory messages and good wishes. 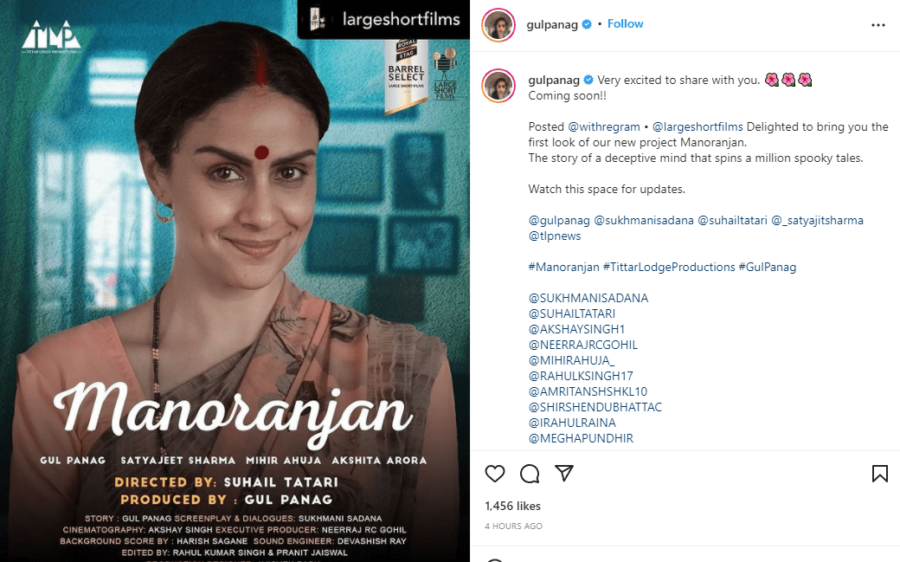 Gul Panag likes to be referred as an entrepreneur who is an aviator, an Automobile and Fitness enthusiast, a biker and a traveller, apart from being an actor. Gul Panag likes to keep her fans updated about her personal life. Recently, she had posted a video with her son on the occasion of Lohri wherein she is seen telling her son about the significance of the festival. She, on the whole has a dedicated fan following who love to see her play all the roles through her Instagram page.

Her fans are now eagerly waiting to see her in this film. Hope it turns out to be a great success!!