Home / News and Media / Gul Panag talks about feminism, breast cancer and running (Interview)
Defying what appears to be a trend with most celebrites in the media eye, there are no over-sized sunglasses shielding her friendly gaze. Her down-to-earth aura belies the fact that she spends quite a bit of her working and playing hours interacting with the rich and the famous. 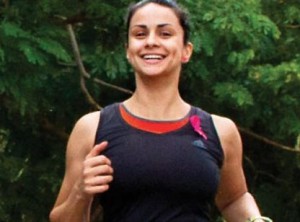 With a coffee on the way and a quick brief of the story I’m working on, she’s unstoppable, as she nimbly hops from one topic to another, without so much as a reminder.
As Pinkathon Ambassador
I’ve seen the benefits of running for almost 20 years, from a kid who was running for the wrong reasons, through endorphin highs, to finally understanding the scientific and physiological advantages that it offers, from cardiovascular fitness to longevity. When Milind (Soman) put together this series of events, it was a natural extension for me to be part of it.
For Women Only
The 10k all women’s Pinkathon, also has 5k and 3k runs to draw women from all walks of life and all fitness levels (’75 per cent of the participants in the Bangalore marathon were first time runners,’ Milind tells us). The idea is to draw attention to women’s wellness and fitness by focusing on the fact that Indian women, who typically place themselves secondary to their children and husbands, need to do something for themselves.
The percentage of women in mainstream running events is dismal (about 10-15 per cent according to Milind; as most Indian women are conservative and don’t feel comfortable running with so many men; moreover, some families won’t permit it due to safety and other reasons. Pinkathon participants often run in saris and salwar-kameezes). Once they run a Pinkathon, maybe they’ll be confident enough to run a mainstream marathon.
We don’t know what causes cancer.  Obviously, it’s lifestyle-related. Running mitigates some of the aspects of our bad lifestyles and all that we put ourselves through in terms of stress, poor eating and drinking habits, pollution…
Also, the only way to fight cancer, is early detection, which is only possible with awareness. So raising breast cancer awareness is one of the cornerstones of the Pinkathon. (Also read: Amla can reduce your cancer risk by half!)
From Vanity to Reality
‘Kicked into running for a vanity-based reason, by my dad,’ as she describes it, when she was 15, Gul was soon addicted, ‘The first year was torture, but by the time I was 16 I was hooked. In retrospect, I got to eat a little excessively and knew that it wasn’t piling on. And then, I discovered endorphins.
Endorphins typically kick in after 17-18 minutes of any activity that increases your heart rate and last in your body for about 20 hours. They create a great feel-good space, counter PMS, and generally make you a very very happy person.
Running has been scientifically proven to increase your immunity levels. Amongst other things it keeps diseases (including cancer) at bay, which is a powerful reason for urban women to start running.’  (Also read: Could walking be more healthy than running?)
Status Quo Woes
Patriarchy is the biggest impediment to the emancipation of women. The answer to it is not matriarchy… before the tweets from men’s groups start flowing in. The suffragettes in the UK fought for women’s right to vote and got it in the early 1900s. Did we fight for the right to vote? NO! It came to us automatically, because we got independence just 66 years ago.
India’s noble intention of society before self has been corrupted into a space where we’ve become conformists. And because we are conformists, we don’t challenge the status quo. We’re not doing anything for ourselves because we think somebody else will fight our battle. That’s not going to happen.

Check Stereotypes
It’s important to safeguard our girls, but we should not breed stereotypes. We shouldn’t raise boys with a sense of entitlement. When I have a child, I shouldn’t talk crap like ‘Oh! Girls should play with dolls and boys should play with trucks’.
Raising our children in a gender-neutral manner, will lay the foundation of a gender-neutral society. But any change takes three generations… that’s 45 years. So people who think it’ll happen overnight, are sorely misguided.
Women vs Women
Fundamentally what bothers me is that women professionals don’t put a stop to the negative aspect of patriarchy, which makes you yearn for a male child (which is why the educated class has the highest incidence of female foeticide), which makes it ‘okay’ to let our property go to out brothers or not give property to our daughters, which makes it okay to let go when we’re molested or ass-grabbed. (Also read: Satyamev Jayate highlights the issue of female foeticide)
Pick Your Battles
I’m not one of those woman who believes in dressing the way I feel. I dress appropriately. Proving a point by showing up in shorts in my village Fatehgarh Saheb to talk about female foeticide, doesn’t make sense. You got to pick your battles. I won’t defy common sense and bust the Delhi curfew by going out at 11.00 at night. I want to live to fight another day. I don’t want to be a victim and a statistic.
Men and Woman Aren’t  Equal
I’m not a feminist bra burner at all. But I believe in the eyes of the law, I jolly well have equality and I’m going to fight tooth and nail for it. But am I going to fight for crazy things like women in combat? I don’t  support it, because I’m aware of the physiological differences between men and women. Why are the women’s 100m world record and the men’s 100m world record not the same?
A Slap Should Do It
I went to Versova jetty yesterday with the girl who works in our house. ‘Is there no ched-chad here?,’ I asked. No! Why? Marte hai. People get together and beat eve-teasers or molesters. And it works. A perpetrator should know that he cannot get away with violating a woman, socially or legally. He should be afraid that there is somebody out there who will slap him.
The Law of Change
Raja Ram Mohan Roy started campaigning against social evils in the late 1700s, but its only when it became a law that it actually stopped (almost). There need to be time-bound courts for violations against women. Punishments need to be exemplary. That said, seven years in the jail is bad enough. I don’t think we need death for rapists. I don’t think we need castration. We live in a democracy, we’re not the Taliban.
5 Good Reasons to Run
1 Indulge a few sinful eating habits without worrying about weight gain
2 Endorphin highs which kick in after 17-18 minutes, last for about 20 hours
3 Higher immunity levels
4 Shrug off stress
5 Cardiovascular fitness and longevity
Source: DNA