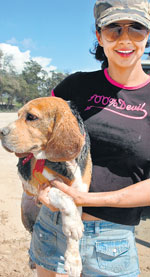 The cast and crew members of Summer of 2007, who are presently filming in Pune, made frenzied trips of various high-profile hotels and resorts before settling down for one. This is because Gul Panag was accompanied by her pet dog, Milo and most hotels preferred to flash an apologetic smile and say, ‘No pets allowed, ma’am.’

Her assurances that her pet is friendly and wouldn’t be of any threat to other guests fell on deaf ears. Nevertheless, the actress wasn’t ready to hand over her pet to any local kennel. Eventually, the producers found a resort 20 kilometres away from the location where they allow guests to keep their pets in the premises.

Gul says, “We had to hunt several hotels before we found one that allowed Milo. The result is that we are staying so far from the location. Thankfully, the film’s director Sohail Tatari and producers are fond of dogs too.”

A Beagle, Milo always accompanies the actress on film sets.

A crew member says, “Milo is a very friendly dog and everyone keeps petting and taking care of him when Gul is facing the camera.”

When the actress is in the city, Milo religiously goes with her to the Mahalaxmi Race Course every morning where she rides horses.

Gul says, “Initially, Milo was not too fond of the horses. But these days he has become friendly with them and even shares carrots with them.”

Summer of 2007 revolves around a bunch of young doctors who come face-to-face with existing poverty and lack of health care in rural parts of the country. The film also stars Sikander Kher, Arjan Bajwa and newcomers Yuvika and Alekh.