When fads overlook the reality

Home / News and Media / When fads overlook the reality
Among the first to be spotted in India with a shiny Power Balance band on his wrist was industrialist Sidhartha Mallya. Newspaper reports claimed he wore the band to keep a check on his metabolic rate. It seems that junior Mallya picked it up from London after his trainer recommended it to him. Is it possible for a silicon band with a hologram to really affect your health and fitness positively? 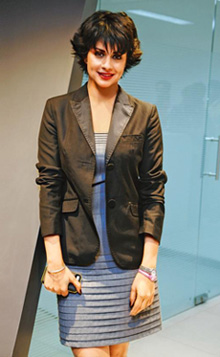 For those who don’t know about it, Power Balance bands are silicon bracelets with an incorporated hologram. According to the claims initially made by the manufacturers on their website (www.powerbalance.com), the band is “infused with healing and restorative powers”.
Going viral: Actor Gul Panag sporting a Power Balance wristband.
That claim is no longer on the website, but wearing a Power Balance band to “improve health” became the rage worldwide last year, and has begun to catch on in India too—recently actor Gul Panag was spotted wearing the band. Sports personalities such as basketball star Shaquille O’Neal and Formula 1 racing driver Rubens Barrichello were so convinced the band worked that they started endorsing it in October. In fact, late last year, Kate Middleton, David Beckham, Brad Pitt, Megan Fox, Demi Moore, P. Diddy and Leonardo DiCaprio were all photographed wearing the bracelet.
“I find it difficult to believe that the product really works,” says Vesna Jacob, founder director of Vesna’s Wellness in New Delhi. “It could be yet another fitness fad, one of dozens of them. There are people on top of their game who actually wear the product and swear by it,” explains Jacob, “but the increase in their abilities could be a placebo effect.”
Placebo effect is a simulated medical treatment given to patients who actually believe that they have improved just because they have been “treated”. In other words, the athletes might be performing better since they believe in the “magic” of the band.
The company which manufactures these bands was founded four years ago by two brothers—Josh and Troy Rodarmel. At the time, they claimed the bands were based “on the idea of optimizing the body’s natural energy flow, similar to concepts behind many Eastern philosophies”. They further claimed that the hologram in Power Balance was designed to respond to the “natural energy field of the body”.
In January, however, these claims were settled when the company retracted the health benefits of the hologram following a lawsuit in Australia. Power Balance Australia chief executive officer Tom O’Dowd admitted in a public statement that “in our advertising we stated that Power Balance wristbands improved your strength, balance and flexibility. We admit that there is no credible scientific evidence that supports our claims and therefore we engaged in misleading conduct… If you feel you have been misled by our promotions, we wish to unreservedly apologize and offer a full refund.” Since then, the description of the band has been changed on the Power Balance website to just another silicon wristband.
It does not seem to have affected its popularity, however. For the band is still finding many takers. Just another case of the Emperor’s New Clothes?