Dev Lahiri was my headmaster at the Lawrence School, Lovedale. I have the fondest memories of him – as an orator par excellence, a man who commanded respect by leading from the front, and always by example. Maybe he was considered a bit stern. One of my batchmates attracted Mr Lahiri’s full ire for throwing ink (our new, nonviolent, democratic form of protest) at a physics teacher. He had a soft side too – in 1999, when I won the Miss India pageant, he named a newborn foal ‘Gul’, after me – much to my surprise, and that of his students at the time. In 2011, despite struggling with his a heart problem, he made sure to be at my wedding. 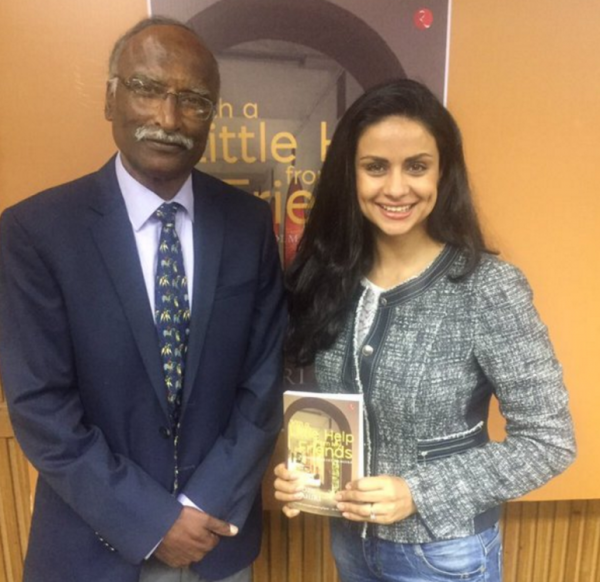 Still I never had a full picture of the man until I read Mr Lahiri’s book, With a Little Help From My Friends – A Schoolmaster’s Memoirs. Reading it was both an enriching and a disturbing experience.

Enriching because though I knew him to be a man of extraordinary intellect (and a Rhodes Scholar), I was blown away to discover others talents. Long distance running, for instance – his first marathon (that’s 42 kilometres, non-runners) took him two hours and 43 minutes, which is really something. That was in 1975, representing St. Catherine’s College, Oxford, where he was also part of the student’s elected body, as he had been earlier in St. Stephens, Delhi.

Disturbing because after choosing an altruistic career, his journey was so difficult, so tumultuous – especially when it came to running and trying to reform institutions – that it could actually deter other well-meaning souls.

That a man so talented decided on a career in education might seem perplexing given that we naturally (and mistakenly) assume he would pursue personal gratification over making a contribution to society. All his life, however, he strived to set high standards with his personal conduct, even when easier options were available.

I was in school at a time when the menace of bullying had not even begun to be been tamed. I routinely came to class to find boys with black eyes, bruises, even fractures. This is the awful baggage that old-world public schools carry and which no one wants to talk about. One of my batchmates had such a severe fracture to his wrist – from ‘hockey stick shots’ – that even the Military Hospital in Wellington refused to admit him and recommended a better-equipped institution for his treatment.

“We were bullied, so why shouldn’t we return the favour? It’ll make a man of the boy.” I’m not sure that’s what Henry Montgomery Lawrence had in mind when he said, “Send him to Lawrence and make a man of him”, a sentiment Mr Lahiri echoes in his memoir.

From the start, he was very, very tough on bullying. The year he took over, my husband was the Head Boy. He was taking a principled stand against bullying too, which made him less than popular with some members of his batch. His brother, still in class 9, bore the brunt of this stand.

Years later, when my own brother became Head Boy and picked up the same agenda to eliminate bullying, he met with the same resistance. But the wheels of change Mr Lahiri set in motion (starting with counselling, leading to various sticks and carrots, and finally suspending repeat offenders) did eventually move things forward. At Founders’ Day last year, I saw the ninth-standard boys – always the worst victims – lounging on the senior-school lawns, just feet away from the Super Seniors! We had come a long way from standing at attention every time a senior walked by.

At Lawrence, he raised a formidable equestrian team from scratch, a team that went on to dominate the competitive arena. He loves dogs and horses, and is passionate rider himself. The riding team got to see his soft side all the time, which ironically, was one of the things used against him before his unceremonious exit from the school. After his term at Lovedale, he went on to head Welham Boys in Dehradun. Once again, he turned the school around, and Welham Boys finally emerged from the shadow of the Doon School.

Mr Lahiri made many enemies, mostly status-quoists, whom he took head on. It would have been easier to just play ball – and maybe he could have achieved his reformist agenda if he’d cloaked it and gone about it in a politically correct manner. Most of us would still look up to him. But he chose the harder path and set an example for us to emulate.

If circumstances and status-quoists hadn’t tested Mr Lahiri enough, fate intervened at regular intervals in the form of heart ailments. For over twenty years, where a lesser man might have given up, he has overcome the obstacles created by his heart.

Despite all the trials and tribulations, he earned so much goodwill and won so many friends that help was a call away whenever he needed it. Whether it was with medical matters or for a roof over his head, his friends opened their hearts, homes and purses, which says a lot about the man, my headmaster Dev Lahiri.

Read his book to learn the reasons our education system is the way it is. The reasons why anyone who tries to reform things, or to upset the status quo, faces not just with resistance but also retribution. This isn’t just a symptom of our education system but our society at large. Above all, read this book to learn how a man can raise the bar – of how much he is capable of doing, and how many times he can stand back up after he falls.

With a Little Help From My Friends – A Schoolmaster’s Memoirs by Dev Lahiri, Rupa. Rs. 295.

One Comment on “Dev Lahiri, a Headmaster Bullied But Unbowed”